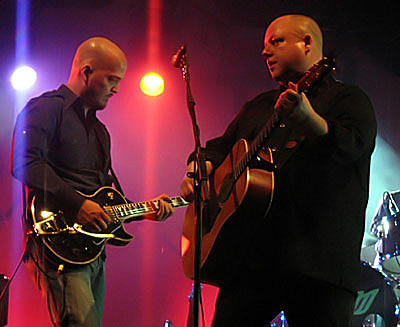 The above photo was borrowed, resized, and optimized without permission from Soviet Panda. His photos from the November 12th Minneapolis show are amazing, so go check them out.

In one week from now, The Pixies (the 6th greatest band in America?) will return to NYC for an 8 show run. It will be their first concert here in a bazillion years.

Those lucky enough to have/get tickets to the opening show, will see Brooklyn's own indie superstars, TV on the Radio, open the show.

All eight of these shows are sold out, BUT it is extremely easy to buy and trade tickets. (Craigslist, Ebay). You have no excuse. If you are in, or around NYC, and you are not going to at least one of these shows...well then you are either broke or stupid. Keep in mind, that although I consider Hammerstein Ballroom a large venue, it is a small venue compared to where they've been playing in other cities.

Leary of "reunion" tours? Think the Pixies are too old to rock? Well, the reviews from around the world are in, and The Pixies are as good as ever.

"Say to Me, Where Have You Been?": The Pixies Roar Back After 12 Years

If you haven't heard the Pixies yet, the band that has influenced all bands that have come after them, maybe these downloads will help you realize what you've been missing...

Nada Surf covering one of my favorites, Where is My Mind (and other assorted MP3s)

Pixies is definitely the word of the week.

Pixiesmusic.com is the site for all that is Pixies.

I'm in Love with Montreal