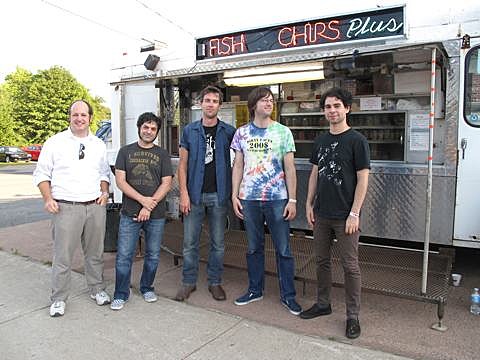 Now in their 16th year, Brooklyn vets Oneida continue to fight the good fight, having released A List of the Burning Mountains last year. The band have a sole show on the horizon: Glasslands on Friday, October 4. Tickets are on sale.

The Glasslands show is opened by Dump which, as you may know, is the solo project from Yo La Tengo bassist James McNew. After that he'll make his next public appearance as part of Yo La Tengo's four shows at The Bell House in December, all of which are sold out. While on the subject, Ira Kaplan will also be at The Bell House with the A-Bones when they open for The 5.6.7.8.'s on October 27 (tickets).

Back in Oneida-land, drummer Kid Millions is probably the band's busiest member, having played in Spiritualized on North American dates this year, and with J. Spaceman solo too. (Spiritualized will be back in October for the Mexican Summer anniversary shows.) He and Oneida's Bobby Matador also put out their third album as the more experimental People of the North -- Sub Contra came out via Thrill Jockey in June and you can stream that on Spotify. Stream its track "Drama Class" below...

People of the North - "Drama Class"