photo: Oneirogen at Union Pool in 2014 (more by Greg Cristman) 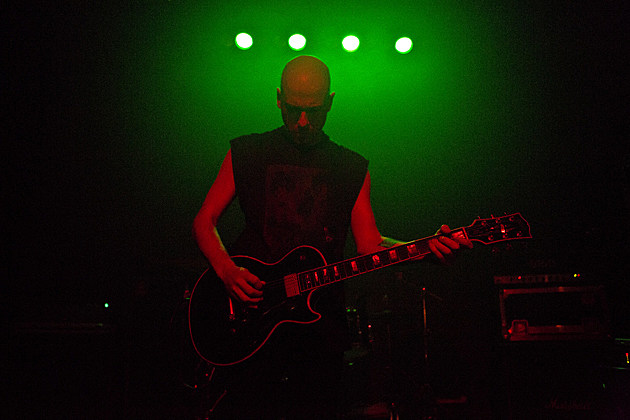 NYC-based heavy noise composer Oneirogen has a new EP called Plenitude and he's streaming it in full. The EP, out now on European label Denovali, is a departure from the more guitar-oriented industrialism of Oneirogen's past releases. It deals in the kind of harsh electronic noise-scapes that call to mind something like Prurient or Cut Hands. It's dark and absorbing stuff, and you can listen below (via Noisey).

Oneirogen heads out on a European tour at the end of the month, and when he returns stateside he'll play a NYC show on October 15 at Trans Pecos with Spiteful Womb and Field Grave, both of whom were involved with the M.A.P.S. Noise Series that Oneirogen played last year. Tickets for that show are on sale now.

That Trans-Pecos show happens to be the day after that same venue hosts Stern, the band fronted by Kayo Dot's Chuck Stern and also features KD frontman Toby Driver, who just played with Oneirogen at The Stone last month. Stern, along with Ava Mendoza's Unnatural Ways (who have an album out now) and Brooklyn jazz/prog/general insanity outfit Zevious, will open that show for Los Angeles math-rock crew Upsilon Acrux. For Upsilon Acrux (who share members with Chelsea Wolfe's band who just toured), it's part of a tour in support of their new album Sun Square Dialect. Tickets for that show are on sale now.

All tour dates for Oneirogen and Upsilon Acrux, as well as streams of the new releases for both bands, below...