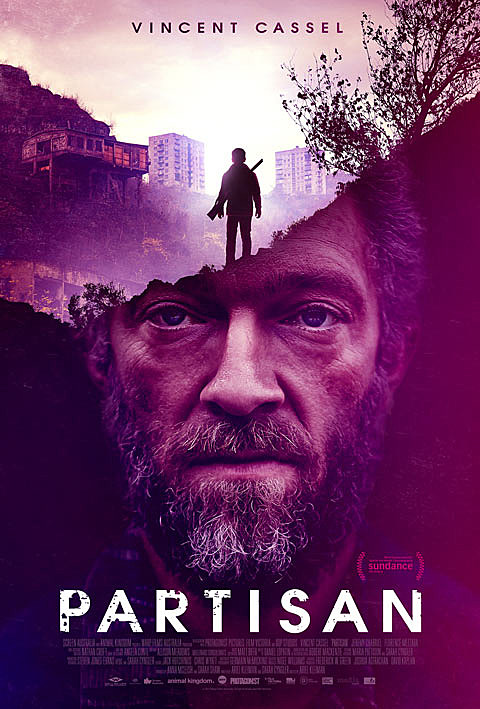 New thriller Partisan opens this Friday (10/2) and staring Vincent Cassel and Jeremy Chabriel and an unusual father and son:

Raised to become an assassin, a boy begins to question the ways of the cult-like commune he was born into in this Sundance award-winning thriller. On the edge of a crumbling city, 11-year-old Alexander lives in a sequestered commune, alongside other children, their mothers, and charismatic leader Gregori (Vincent Cassel, BLACK SWAN). Gregori teaches the children how to raise livestock, grow vegetables, work as a community, and how to kill. Threatened by Alexander's increasing unwillingness to fall in line, Gregori's behavior turns erratic and with the two set dangerously at odds, the residents fear a violent resolution is at hand.

The film's score is by Daniel Lopatin (aka Oneohtrix Point Never) and it also features music by some cool folks working under pseudonymns. "The Hardest Thing To Do" by Tony Primo and Nixxie is actually Metronomy's Joseph Mount and Robyn. A couple other similar songs were created around the release of the film (though not actually used in it), including "Friday Night" by Spanna N The Werx (actually Jarvis Cocker and Jason Buckle of All Seeing I) and "I Eat It At Home," credited to Albert Mondo is actually Sebastien Tellier. You can watch karaoke-style videos for all three of those tracks below.

Partisan opens in NYC on Friday at Village East Cinema and we're giving away two pairs of tickets to see it at the screening of your choice. Enter to win below.

In related news, Oneohtrix Point Never's new album Garden of Delete is out November 13 via Warp. Check out single "I Bite Through It" below. OPN will be playing a release show at Brooklyn's Villain on November 20, presented as part of Pitchfork's Tinnitus series.