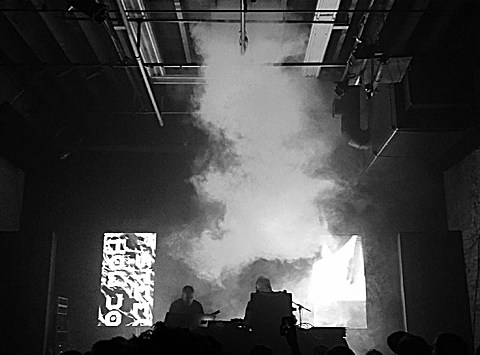 In summer 2014, Daniel Lopatin found himself unexpectedly living the rock and roll lifestyle by proxy on a tour opening for Nine Inch Nails and Soundgarden.

Far from being the hedonistic experience you might expect, Lopatin would wake at 5:30am every morning for soundcheck at whatever identical amphitheatre he arrived at that day, and spend much of the rest of his time on tour staring out the window looking at "repetitive, brutal and ubiquitous" landscapes. As a self-enforced rule, Lopatin would only listen to hard rock stations Lithium and Ozzy's Boneyard in the car to embrace a specific mindset that seems the antithesis of the strange and striking electronic music he's made his name with over the past 10 years.

Watching Lopatin perform his new album Garden Of Delete live in London recently, it became clear how much of this experience has seeped into his Oneohtrix Point Never persona. Not only is he accompanied by longtime visual collaborator Nate Boyce on guitar, he's framed by two vertical screens that look like smaller versions of those you'd see at corporate arena venues - albeit hacked by an alien intelligence to display a combination of otherworldly CGI images and subliminal messages. [FACT]

Oneohtrix Point Never celebrated Garden of Delete at Williamsburg club Villain this past Friday (11/20), and he's since added more dates to his schedule. It includes another NYC show, this time at the larger Warsaw on March 17. Tickets for that show are on sale.

All dates are listed, with a stream of the album's latest single "Ezra," below...