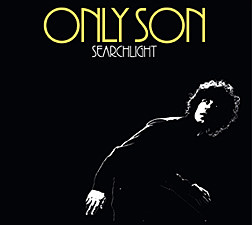 Ex-Moldy Peaches member Jack Dishel aka Only Son released Searchlight on January 18th. The new album features contributions from members of The Strokes, Robbers On High Street and Of Montreal, and includes a duet with his friend and past tour-mate Regina Spektor called "Call Them Brothers." You can download "Magic" from that album above, and check out the video for the same song, and the video for "It's A Boy" below. If you download the album at his Bandcamp, you get a bonus track for free: "Kick 'Em Out" featuring "sweet tropical harmonies" of Little Joy's Fabrizio Moretti and Binki Shapiro.

I honestly have no idea, but based on everything I wrote above (and Regina Spektor's past guest appearances at Only Son shows), I wouldn't be surprised if special guests were in the house when Only Son performs the new album in full tonight (1/20) at the Studio at Webster Hall. The Candles and (as previously mentioned) Yellowbirds (Sam from Apollo Sunshine) are opening.