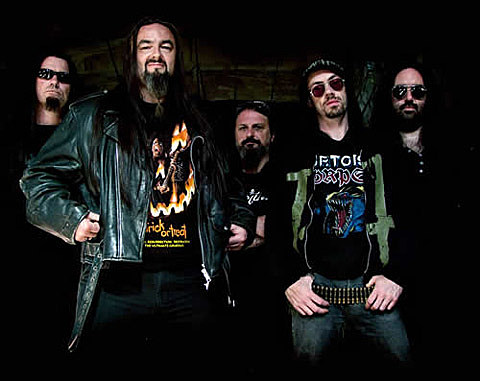 Three out-of-the-country speedsters are setting up a "THRASH INVASION" of North America. England's Onslaught, Denmark's Artillery, and Canada's Striker will join forces to hit the road near the end of October. The package will drop in to locales like Chicago, Seattle, and Los Angeles. On October 23, they'll play NYC's Saint Vitus. Ticket information will be available soon. The full list of dates appears below.

Onslaught come from a punk background, making the leap to thrash in the mid-'80s and peaking with 1986's The Force. The band reformed in 2004 and have put out three solid albums, including 2013's VI. Denmark's Artillery began their post-demo life with a run of three Euro thrash classics ('85's Fear of Tomorrow, '87's Terror Squad, '90's By Inheritance) that occasionally stepped across the aisle to power metal. They reformed in 2007 and went full power thrash, dropping Legions last year. Striker are the young pups, forming in 2007 and growing into their speed metal/power metal formula on their 2012 sophomore release Armed to the Teeth. Their newest, City of Gold, is set to be released by Napalm Records on September 9.

As for the tour's October 23 Saint Vitus date, the three bands be joined by a special guest. Czral of Norwegian avant-garde rockers Virus will be DJing that night and will then play two shows with Virus on October 24 & 25 at Saint Vitus. The dates include loaded bills with appearances from Krallice, Ocrilim, Dysrhythmia, and more, making Virus' first US appearance a special one. And you can win tickets. Invisible Oranges is currently running a contest, giving away  a pair of tickets for each night to the show.

All of the dates along with streams of the bands appear below.