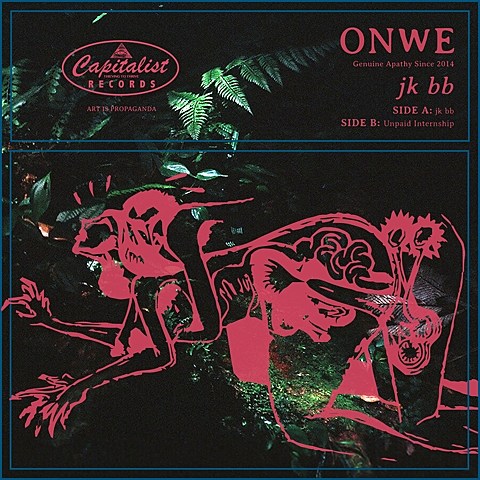 ONWE, the "Bushwick cyberpunx" project led by David Welles, recently released a single, "jk bb" / "Unpaid Internship," via Capitalist Records. The label's logo looks a lot like Capitol Records' logo, and ONWE's single artwork (above) looks a lot like Sacred Bones artwork. Both tracks can be streamed for free or downloaded for $1,000 or more on bandcamp and they've got videos for both songs too, which you can watch below. Both videos begin with the Capitalist Records logo, and their love of irony doesn't stop there. The "Unpaid Internship" video appears to be mocking the same things the Brooklyn Girls video (which came out a month and a half later) is celebrating, and the "jk bb" video looks like it's mocking the Tumblr aesthetic, while also using the Tumblr aesthetic, of course.

ONWE have a few shows coming up, including two in their hometown. The first is Friday (8/22) at Bowery Electric with Beiju, Madam West, The Yin Yangs and their Capitalist Recs labelmate Bodega Bay. Then, the following Friday (8/27), they play a Showpaper benefit at Trans Pecos with Bluffing, Matt Holden and Fern Mayo.