photo: Operators at Central Park in 2014 (more by Amanda Hatfield) 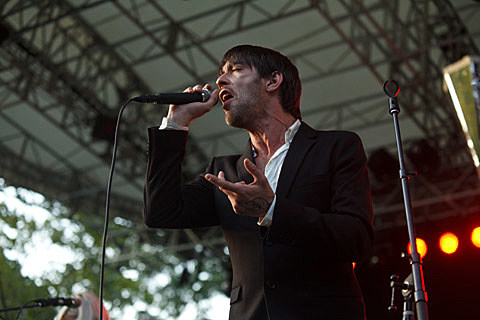 Dan Boeckner's band Operators have so far released an EP and a a stand-alone single, and now they just debuted five new songs in a KEXP session (recorded in November). They're bold, danceable pop songs, unmistakably Boeckner's work, and should be instantly satisfying to any fans of this band or his songs in Wolf Parade, Handsome Furs and Divine Fits. In fact, these might even feel more spirited than that first Operators EP. Watch the video below.

Operators are also touring this winter into spring, including a NYC show on April 21 at Baby's All Right. Tickets for that show are on sale now. All dates are listed below.

As great as it is to have new Operators songs, our fingers are still crossed that Wolf Parade will return. They've been on hiatus since 2011, a year after the release of their still-excellent third album Expo 86. Last year was the tenth anniversary of their debut album (and mid-2000s indie classic) Apologies to the Queen Mary, which was celebrated with anniversary pieces, a party at Baby's All Right, and more.