Opeth at Music Hall of Williamsburg, 2013 (more by Caroline Harrison) 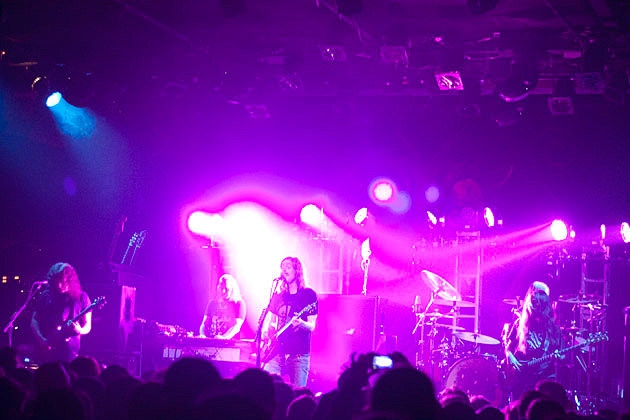 The metal industry's push-back against The Boomtown Rats continues this week with a smorgasbord of new streams. And, jeeze, these are some biggies.

First off, provided you didn't sneak a listen to the leak, Opeth offered the first full-track taste of Pale Communion, the Swedish progsters' 11th album. Mikael Åkerfeldt promised a lighter record and "Cusp Of Eternity" floats like a feather. The death metal density is long gone, traded in for a song that's like a Sunday brunch between Porcupine Tree and Deep Purple. Longtime fans may be perturbed, but "Cusp" starts to settle into a groove on subsequent listens. At worst, "Cusp" gives you time to count the music teacher ponytails during Opeth's next live show. Pale Communion comes out August 26 on Roadrunner Records. Check it out below.

Godflesh's return has gone better with older fans. "Ringer" seemed to hit the spot for most people, me included. The question was, would Decline and Fall feature any deviations from Godflesh's strengths? Today we all find out. The EP is available on their Bandcamp and streaming below. The page includes preorders for the CD and LP that feature bonus dub mixes of two of the tracks. So, how are the other three Godflesh tracks, you ask? Killer. "Dogbite" adds some swing in with their industrial whirr. "Playing With Fire" has a groove that already has been deposited in many bands' riff banks. "Decline and Fall" is an out and out crusher, something which should've scored a certain scene in a certain show that aired last night. All in all, Godflesh. Pure and simple.

Lastly, The Atlas Moth are previewing the entirety of The Old Believer on Pitchfork, complete with a look at the nutty water-reactive artwork. The Chicagoans' third LP to be released June 10 on Profound Lore (preorder) is a spacey affair, reinvigorating the stale atmospheric sludge template with plenty of psychedelic layers. If you're in a rush, skip to the second track "Collider" and its Failure-meets-Canterbury-prog lead work, or the smoky "Blood Will Tell" that immediately renders a couple years' worth of pretenders absolutely facile. Granted, there's been some burnout with the style, but this finds another gear. The Atlas Moth will be hitting the road with Boris soon.

Of course, Monday also brings Invisible Orange's Upcoming Metal Releases. If you're in the market for new metal, it's the list to hit. This round, we've herded contributions from the likes of The Cutthroats 9, Darkest Era, and King Buzzo. And, as always, we give the little guys some shine: Dweller in the Valley, Midnight Chaser, Volturyon, and a whole lot more. Come in and find a new friend or let us know what we missed.

Streams for Opeth and Godflesh below...