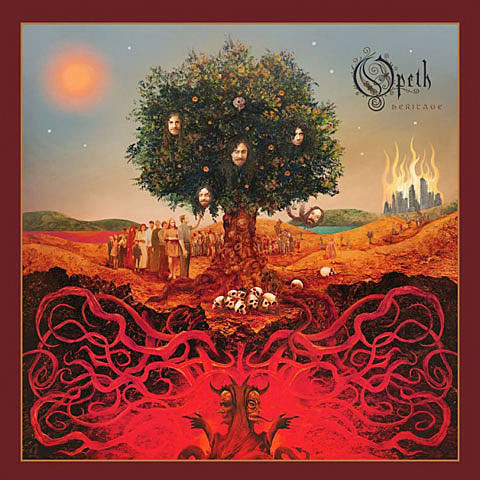 Opeth are releasing their tenth full length Heritage September 20 via Roadrunner Records. Check out the sweet cover art above. In support of the album, the band will tour North America with Katatonia (whose past albums have featured vocals from Opeth's Mikael Akerfeldt). Though all dates are not yet announced, it looks like the tour will begin around the time of the album release with shows at NYC's Webster Hall on September 21 and 22. Tickets for both NYC shows go on sale Wednesday (6/8) at noon. All known dates are listed below.

Opeth keyboardist Per Wiberg will unfortunately not be with the band at these shows. As mentioned on Opeth's website:

Keyboardist Per Wiberg has been relieved of his duties in Opeth as part of a mutual decision with the band. Keyboard duties on upcoming tours will be handled by a musician who is already rehearsing with the band. Said musician's identity will be released at a later date.

Vocalist/guitarist MikaelAkerfeldt released the following statement about the matter: "Well, it's been somewhat of a revolving door of members during the last couple of years, and now, Per is no longer a member. Mendez, Axe and Fredrik and I came to the decision that we should find a replacement for Per right after the recordings of the new album, and this came as no surprise to Per. He had, in turn, been thinking about leaving, so you could say it was a mutual decision. There's no bad blood, just a relationship that came to an end, and that's that. We wish Per the best, and he did a splendid job recording keyboards for the last record, which stands as his final recording with Opeth."

Heritage was produced by Akerfeldt and mixed along with Porcupine Tree's Steven Wilson. The album will be released as a standard version, double LP, special edition with extras, and a box set exclusive to the Roadrunner and Opeth's merch webstore. The track "The Devil's Orchard" will be released as the first single and the band will possibly film a video for the song. Check out the tracklisting for the album along with more dates below...