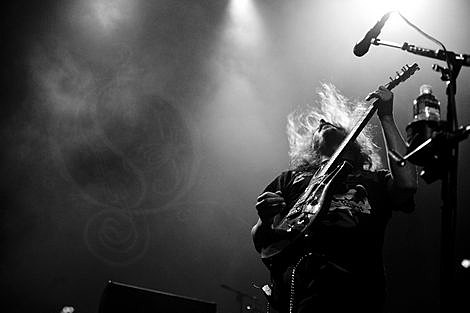 "I can't believe it, but...fuck...we're celebrating 20 years!! 20 years I've been in this band, ever since I was 16! It's insane! As far as I remember, we've never had a release party, never celebrated anything officially. Well, now is the time, you hear?

We've set up a string of shows, six of them actually, around the world. To say that they will be super-exclusive is beyond an understatement!

We've discussed the setlist already and it seems like we'll pull out a few songs we've never played before, some of which fans all over the world have been demanding to hear for years and years. Our main agenda for these shows is to have 'fun' whilst trying to blow your fucking minds. You could say business as usual, but really...it'll be special, trust me!" - Mikael Åkerfeldt, Opeth

Blow our minds? It just may. The band is committed to do TWO sets of over two hours of music at each of the dates; one set will be the entire Blackwater Park LP (rad), with the second set being comprised of "mixed material from the band's extensive catalog". Of the six dates, the US gets two: April 7th at Terminal 5 and April 9 at The Wiltern in LA. Tickets for the T5 show go on sale Monday 12/7 at noon, which will include "VIP ticket packages to all shows which include a laminated VIP pass exclusive to each show, access to sound check, a meet-and-greet with OPETH, a t-shirt exclusive to that particular show, a signed tour program and a special edition CD/DVD of 'Blackwater Park', with a 5.1 mix and a 30-minute, never-before-seen documentary all nicely packaged in a hard cover digipack designed by artist Travis Smith".

All dates and some videos below....