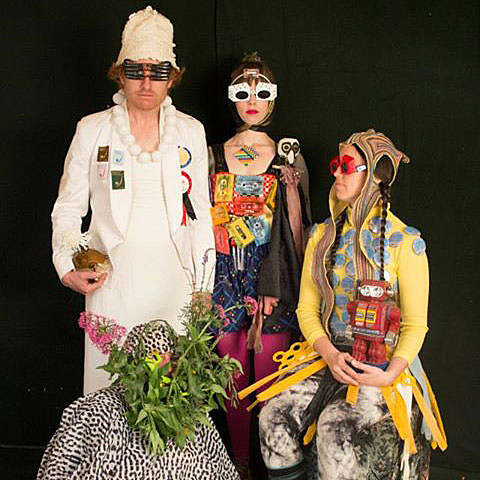 As has become a tradition, one of CMJ's 2014 kickoff events is the New Zealand artists showcase on October 21 at The Studio at Webster Hall (it used to happen at Le Poisson Rouge) with PopStrangers, Orchestra of the Spheres, DOPRAH, and Chelsea Jade. Beverages will be supplied by Spy Valley Wines with snacks by Dub Pies. Tickets are on sale now or you can get in with your CMJ badge. You can stream a mix with all four artists, below.

CMJ will be part of a U.S. tour for Wellington's Orchestra of the Spheres whose second album, Vibration Animal Sex Brain Music, came out last year via Fire. The band incorporate nervy new wave and motorik rhythms into their psych-pop sound and you can watch the new video for single "2,000,000 Years" and a Spotify stream of the album, below. In addition to the NZ showcase, Orchestra of Spheres will also play the Bird Dog showcase at Pianos on October 25 with Ski Lodge, Beverly, Splashh, The Love Supreme, Native America and Roman a Clef. Tickets are on sale now, and all tour dates are listed below.

Popstrangers, who have played the NZ CMJ showcase before, are also playing the Carpark showcase at Mercury Lounge on October 22 with Saint Pepsi, Dog Bite and Chandos. Tickets are on sale now.

Christchurch duo DOPRAH released their debut EP this past summer and you can check out a video for "Stranger People" below. They'll also play Oct 23 at Radio Bushwick, with SEOUL, Fort Lean, The Great Void, Rioux, Tomboy, YAWN, and Zula.

Formerly known as Watercolours, Chelsea Jade released the Portals EP in 2012 and a remix EP last year. She just released a new single, "Night Swimmer," which you can check out via its video below. The NZ showcase is her only CMJ appearance announced so far.

Streams, dates and NZ@CMJ flyer below... 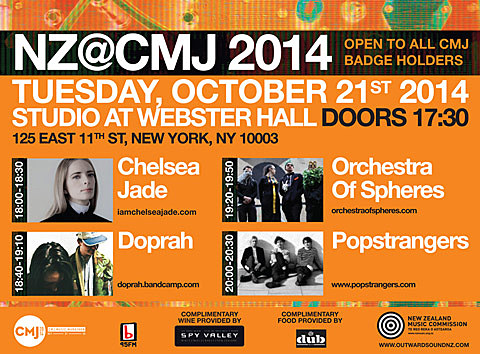