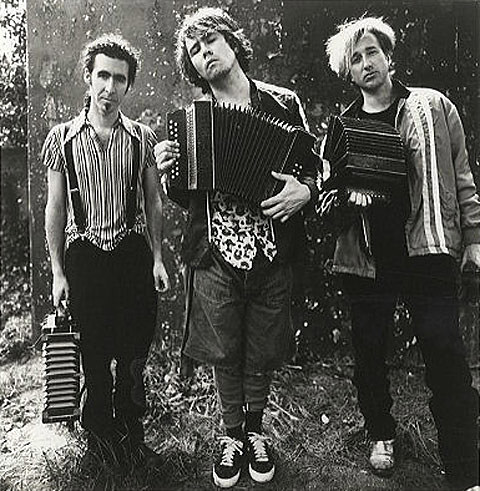 The '90s reunions continue, and here's a genuinely welcome one. The original lineup of Grant Lee Buffalo are reuniting for some select shows this winter, including a stop at Bowery Ballroom on February 5, 2011. Tickets are on AmEx presale now, and go on general sale today/Friday at noon.

The original trio of singer/guitarist Grant Lee Phillips, bassist/producer Paul Kimble and drummer Joey Peters formed in 1991. The band's widescreen Americana sound produced two genuinely great albums -- 1993's Fuzzy and 1994's stunning Mighty Joe Moon -- as well as two that were almost as good 1996's Copperopolis. and 1998's Jubilee, which was made after Kimble parted ways with the band. Grant Lee Buffalo broke up in 1999.

Phillips has stayed busy since. He had a recurring role on The Gilmore Girls as the Stars Hollow town troubador and released a series of quality solo records, including last year's Little Moon. (I'm personally a big fan of 2001's Mobilize). Phillips recently finished work scoring the upcoming film Girl Walks Into a Bar.

The only other announced U.S. show besides the Bowery date is at Seattle's Tractor Tavern on December 9. Some Grant Lee Buffalo videos are after the jump.