What Original Music Workshop is envisioned to look like 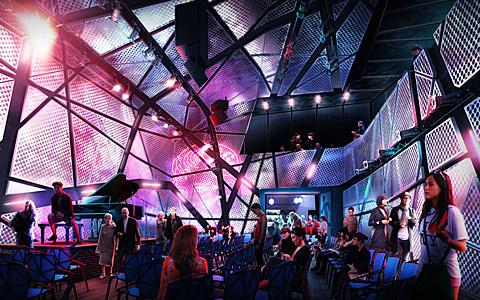 Back in 2012 we posted about a new Williamsburg venue on N. 6th St. called Original Music Workshop that was supposed to open in 2013 with an "acoustically sound" concert hall, recording studio and nightclub. That year has come and gone, N. 6th is a very different street than it was in 2012, but OMW is still not open. Things are still in the works, however. The New York Times recently reported that the space's organizers have raised an additional $16 million to finish it:

Its founder, Kevin Dolan, said that he had lined up what he called "philanthropic investors" to put up the money needed to finish construction. It is an unusual arrangement. Mr. Dolan said that the investors would become part owners of the building, which they would allow the Original Music Workshop, a nonprofit, to use rent-free.

The Original Music Workshop is now projected to open in the fall...of 2015.