Reis of Rocket from the Crypt with Hot Snakes, Sept 2012 (more by Erik Erikson) 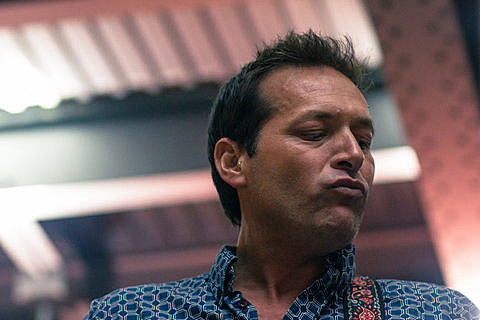 Orion isn't exactly in the black, but regardless Metallica and co have signed on for another three years:

"I wish we broke even last year," Lars Ulrich, Metallica's drummer and co-founder said with a laugh in a phone interview. "I'd obviously like to get into a situation where it's not costing us, but that will probably be another couple of years away. You've got to be in it for the long haul."

It's a festival custom-made for Metallica's loyal fans, with so many opportunities to meet and interact with Ulrich and his fellow bandmates James Hetfield, Kirk Hammett and Robert Trujillo that it can feel like a backyard barbecue with the Rock and Roll Hall of Fame inductees.

"What worked last year was a sense of intimacy and a sense of connection that we made with the fans," said the 49-year-old Danish native. "There was a very cozy family spirit significantly different than other festivals we've played. If we treat this right over the next couple of years, maybe we'll be able to establish a long-term type of thing."

The band goes on to say in the Bloomberg article that they want to try and make Detroit the permenant home for the festival.