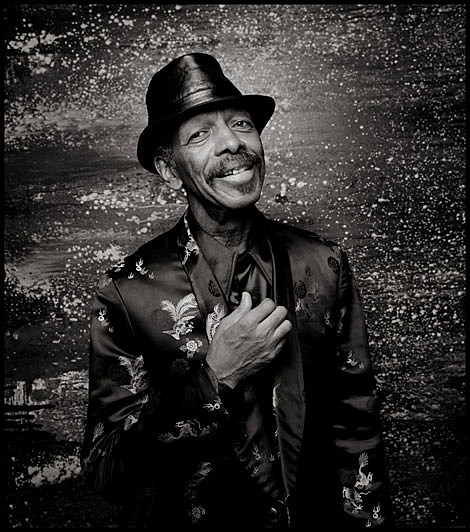 [Ornette] Coleman calls his approach harmolodics: "a theory, not a style." But it's not even a theory, really, it's more of a philosophy, emphasizing equality of voices, freedom, spontaneity and participation -- not just for the musicians, for the audience, too.

Though Coleman's doors are always open, not everyone is inclined to walk in. In the beginning, his music was called noise. The radical turn jazz took in the '60s, inspired largely by Coleman's innovations, chafed beboppers and swing devotees alike. Throughout his career, frequent changes in his sound, from quasi-bop to total freedom to chamber music to symphony to electric double quartet, have made it hard for him to build a wide following. His relations with record labels have been brief and stormy, so there have been long spells with no "product." [LA Weekly, 1996]

The gig is part of Jazz at Lincoln Center's upcoming schedule, which has some other notable gigs as well, like pianist Monty Alexander on October 2nd and 3rd and of course plenty of Wynton.

Ornette appeared on stage with the Roots at their show at London's Royal Festival Hall in June. Video from that gig, with other clips, below...