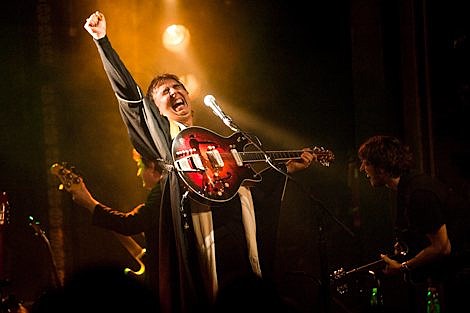 As we mentioned briefly, Brazilian psychotropical legends Os Mutantes are among the first bands to play new outdoor Bushwick venue/beer garden The Well which opened July 14 with a show by Cam'ron ond other hip-hop acts. OS Mutantes' show at The Well happens July 28 with M.A.K.U. Soundsystem, Dom and Citay on the bill as well. Tickets for that show are still available. You can also get tickets at Other Music, who will host an acoustic in-store with Os Mutantes on July 30 at 8PM which is free but limited admission, obviously, as it's a tiny space. These are the band's only upcoming shows at the moment.

The great NYC record store has a long history with the band. Some of you may remember Other Music had their own reissue label, Omplatten, which reissued Os Mutantes' first three albums back in '99. (They were the first three things Omplatten released.) Those records have since been reissued by Polydor, but the Everything is Possible! compilation released by Luaka Bop (also in '99) is a great place to dip your toe into the weird, wonderful technicolor world of the Sao Paulo combo. It's on Spotify.

A few vintage Os Mutantes television performances are below.