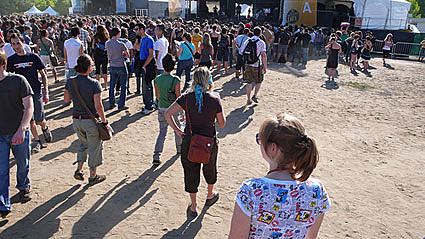 A label rep I was talking to told me that it takes a festival four to five years of good reviews and turnouts to be considered a serious destination on the festival circuit. In its sophomore year, Osheaga has followed up their triumphant debut with an impressive lineup that should continue the reputation they built for themselves last year. Once again, I was granted the task of covering this event... 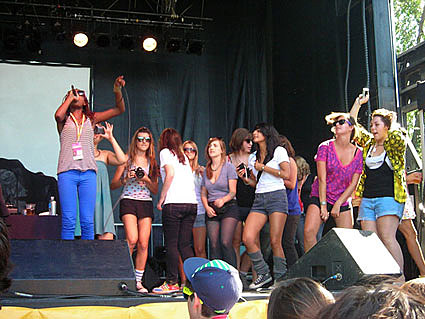 Arriving for day one of the two day festival around 12:30, I could hear the tail end of Apostle of Hustle opening the festivities on one of the alternating main stages. I made my way to the smaller stages on the other side of the park. Hopes were high for Thunderheist, a local hip-hop/house outfit comprised of DJ Grahm and female rapper Isis,. Taking the stage, Isis seemed to apologize in advance saying "we've been up all night." What followed was a rather limp set that took the wind out of my sails. I chalk it up to just a bad set, as I've heard that their smaller shows around town have been really good. It happens to the best of them. Over on the main stage, Jamie T performed to a somewhat apathetic audience. Unfamiliar with his music before that day, he vocally reminded me a lot of The Arctic Monkeys, a point I'm sure he'll have to have to answer questions about for years to come if his career gains traction. 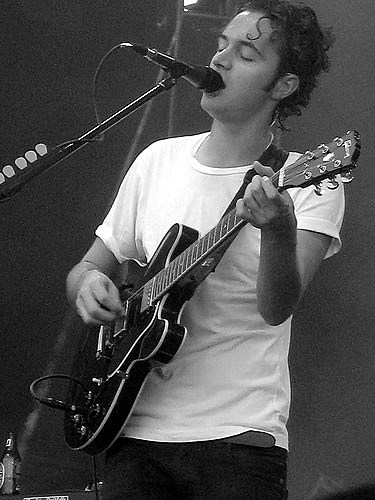 Next up was Editors, and though enjoyable, they seemed rather pedestrian. They seem to have a firm grasp on their sound and stay firmly entrenched in it. Being at the end of the summer and festival season, their performance gave the feeling that this is the same set that they've done time in and time out over the past few months, and this was just another day at the office. Over on the MEG stage, The Clientele performed a strong set to an appreciative audience. And though they were very good, their music and the circumstances surrounding them (small stage, playing largely to an audience unfamiliar with their mid-tempo sway) just fed into the overall malaise. The seeds, it seemed, were planted for a "blah" day. 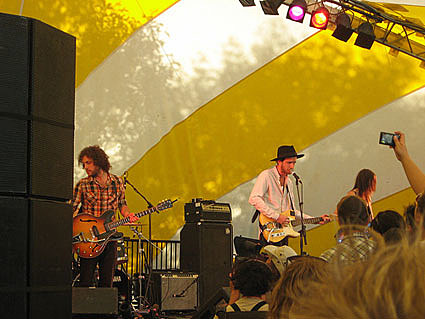 Then The Veils took the Trees Stage. The London band, by way of New Zealand, are an enticing mix of early Nick Cave, revenge blues, and garage rock. Sporting a six o'clock shadow and wearing an open, sweat-drenched dress shirt and wide, flat brim hat, singer Finn Andrews looked like a strung out Amish peasant. The band showed the rare combination of being intense while displaying a sheer level of fun. The tiny stage area was filling up as the set moved on, attracting everyone within earshot. Their performance brought to mind the thought that too many of the lower-tiered bands at festivals don't take the opportunity to really win over an audience. They don't see them for the opportunity they present. But like Tokyo Police Club and Land of Talk did before them at last years festival, The Veils certainly got crowd's (and my) attention, and I will definitely see them the next time they are in town. 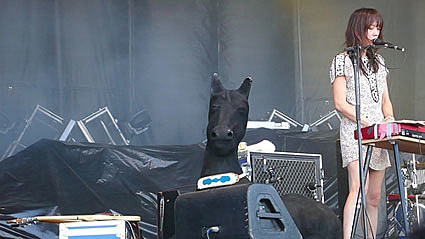 Up next on the main stage were Blonde Redhead. Their atmospheric-dense set, which would normally cool off a festival crowd, was eaten up by the Montreal faithful. Dancing seductively when not playing, Kazuseemed very much in her own world, a world that was only accentuated by the Pace Brothers' diligent playing. The only setback was that it became evident during "Equus" that the band was playing along to a backing track, which is a minor gripe, but felt it worth mentioning.

Then it was back to the Trees Stage where the always awesome Panthers played a blistering 30 minute set. Someone next to me referred to their music as a combination of "proto-punk power" and "corvette bomber cock rock." I have no idea what "corvette bomber cock rock" means, but it sounds oddly fitting. They were the second band as part of Vice Magazine's takeover of the stage - part of their "corn roast", complete with giveaways of corn to anyone willing to wait in line for it. 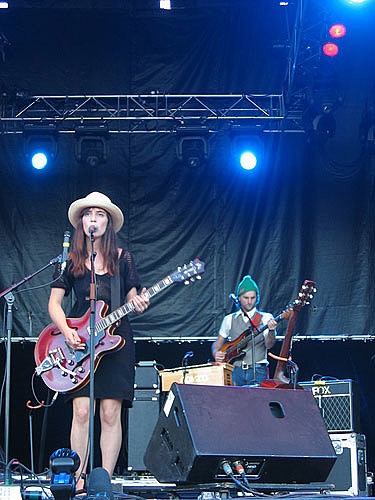 On the main stages were the one-two combo of BSS affiliates Stars and Feist. Both commanded the largest audiences at that point in the festival. Stars delivered, as always, with their indie-pop goodness. The crowd received the tracks from their new album Our Bedroom After the Wat very well, which suggests either their music release strategy has worked (it has been available for iTunes download since May, while the physical copies aren't available until the end of this month), or everybody now only gets their albums through piracy. Feist was next. She performed a confident, fun set that at times kept the crowd at a hushed silence. No small feat at a festival, to be sure. The biggest crowd pleasers were "My Moon and My Man" and "So Sorry" from her Polaris Music Prize- nominated The Reminder.

For as much criticism and bile Billy Corgan has received for reviving The Smashing Pumpkins in the indie rock press, there is no denying that the band still has a large following. I haven't seen that many Zero shirts in one place since I was a junior in high school. Tonight was the chance for many people to see the Pumpkins for the first time. They haven't played as a band in several years and their last appearance in Montreal was in 2000. I, coincidentally, was at that show. It was the Summersault festival, and featured them, Our Lady Peace, A Perfect Circle, and Eve 6. Times have changed. 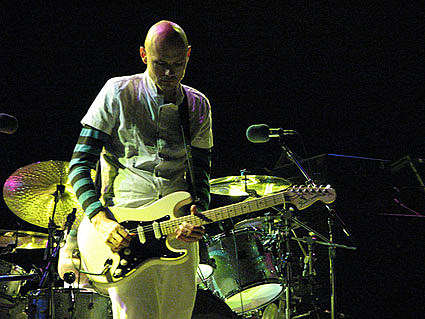 Opening with the thunderous "United States of America," they were a were a tight, at times too professional outfit that just commanded the stage. The Pumpkins first started playing arenas and stadiums in 1996, so a festival like this is old hat. Despite their complete mastery of the circumstances, they didn't play by the numbers. Billy looked like he was genuinely having a good time on stage, even at one point breaking into laughter mid-song. The set was also a good mix of old and new, including long adored album cuts like "Silverfuck."

The highlight of the night was "Tonight, Tonight," supplanting synths over the ubiquitous strings from the original. The crowd was with it, singing every word, playing the role of rapturous backing vocals. Compared to "Bullet With Butterfly Wings," which they played earlier in the night at double speed, Corgan and Co. appeared to still be emotionally invested in the song and played it out of want as opposed to obligation. Staying another 20 minutes, I made my way to the metro, dead tired and having been on my feet for about 11 hours straight.