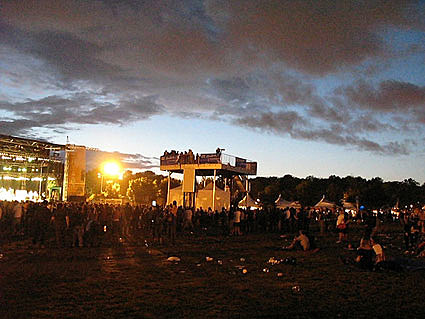 Osheaga, the outdoor music festival in Montreal, celebrated its third birthday this weekend with a bevy of local acts, some emerging talent, and great live performers. Day one (Sunday August 3rd) of the festival was also one of the most hectic musical days in recent [Montreal] memory. The week long Francophone music festival, FrancoFolies, concluded the same day with a performance by former Osheaga artist Malajube, and Wolf Parade (another former Osheaga performer) finished a tour downtown with their first Montreal performance since the release of At Mount Zoomer....

I started my day at 2:30 with Sleepercar on one of the two rotating main Osheaga stages. Sleepercar replaced the canceled Eddy Grant performance. It was an upgrade in my opinion. Sleepercar is the alt-country side-project of Jim Ward, former At The Drive-In member and current frontman of Sparta. Their debut record West Texas was a recent discovery for me and so their late addition to the bill was a fun surprise, especially in light of the disappointment that was Foals' last minute Osheaga cancellation. 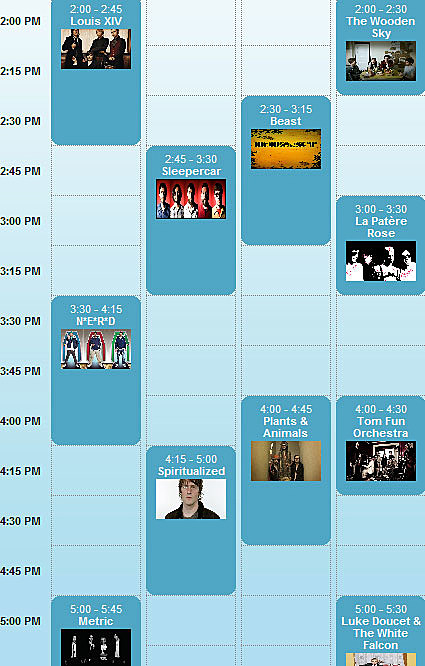 After waiting more then twenty minutes for N.E.R.D to get on the stage (technical problems appeared to be the culprit), I decided to head over to see Plants and Animals. The local crowd was large and rapturous. Every time I see them, they change things ever so slightly but always keep it exciting and fresh. Another great showing. After that, I headed over to see Spiritualized. Unfortunately I arrived at the final minutes of the set, which was feedback and pedal heavy. To close, Jason Pierce rammed his guitar through a speaker and walked off. Whether it was frustration, elation, or just performance, I don't know. I saw it out of context.

Evidently, because of the sound problems with N.E.R.D, the organizers had to change set times. I only caught five minutes of Metric - one of two returning acts to Osheaga -so I could go see Montreal faves Duchess Says, the other returning group from the inaugural festival. Their music is a frenetic collision of low end bass and piercing moogs. Not long after arriving, frontwoman Annie-Claude jumped into the crowd and began moshing with the receptive audience. As she walked further in the crowd, I noticed she wasn't wearing any shoes and was walking around the muddy ground, the by-product on the scattered rain the whole day. After putting mud warpaint on her face, she walked around the audience and started pits with photographers following her in tow. 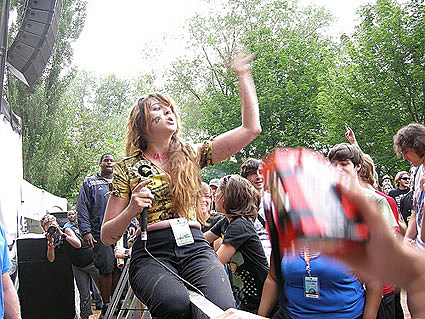 I left to go see Le Husky one stage over. The francophone troubadour crafts melodic, moody music around his distinctive voice. Sans drums (save for the occasional bass drum by the guitarist), their set had an ethereal quality that floated in the ether and made their performance more engaging. Most who gathered, chose to sit down and take it all in. A great set by a band that should get more exposure to the anglophone world.

Devotchka was up next and they put on an impassioned performance. I always thought there was more people in the band. To see only four people and a stage full of instruments create that deep, involved sound really changed the way I view them as a band and no doubt enhanced my appreciation of their musicianship. Though I wanted to stay the whole set, the scheduling changes meant I had to leave early to make sure I didn't miss any Cat Power.

The sun shined brightest during Chan Marshall's set, with only a couple gray clouds left in the sky. Her set was a mix of standards and some obscure tracks, including her closing number which was sung in Italian. Her backing band was mutually and consistently tight and relaxed at the same time, effortlessly playing through the soulful numbers as Chan danced and swayed up and down the stage. A fun set. 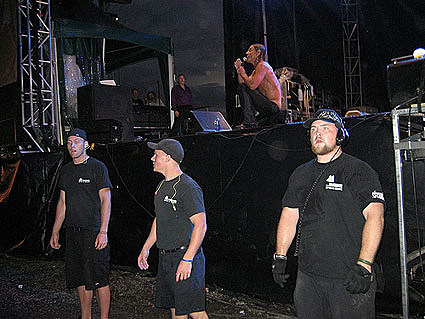 I have to be honest, I was skeptical about seeing Iggy and the Stooges. I can't really explain why, I just was. The whole day, though, they were the most talked band on the bill. The anticipation was palpable. When he came running out in his uniform (no shirt and denim so tight they could be painted on), the loudest reaction of the day erupted. Teens and adults started running toward the stage. The excitement was infectious and I got caught up in it. When they broke into "I wanna be your dog," the audience was deafening. The band, especially Mike Watt on bass, was really motivated and excited and only added to tornado that is Iggy, who hopped and humped speakers, doused himself in water and got in amongst the people. When after five songs he demanded everyone get on stage with him, pandemonium broke. Getting anyone he could find to sing "No Fun" with him, their performance was the highlight of the whole night, to be sure. It is unfortunate that their trip to Montreal ended the way it did.

That seemed like a good cap to Day One of Osheaga. I had to jet to go see the aformentioned Wolf Parade, meaning I missed The Killers and Sebastien Grainger, though I did get an interview with Sebastien that will be posted soon.