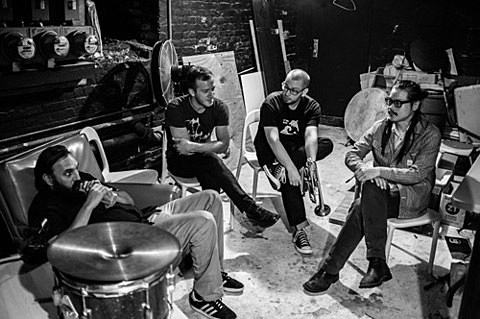 Montreal-based saxophonist Colin Stetson does a lot of collaborating, in addition to his own records and playing on other peoples. One of his many projects is Oso Blanco, an avant garde quartet that also features trumpeter Nate Wooley, violinist C. Spencer Yeh (of Burning Star Core) & drummer Ryan Sawyer. You can check out video of Oso Blanco playing live at Union Pool back in 2011 below, and you can see them live in person Monday (8/25) at Baby's All Right. Also on the bill are Samara Lubelski (Jackie-O Motherfucker, Chelsea Light Moving) playing solo, and James Hoff. Tickets are on sale.

The Baby's All Right show is the day after Arcade Fire's three-night run at Barclays Center. Colin Played on Reflektor and has played live with them before... maybe he'll make an appearance at these shows? We shall see. The only other date on Colin's schedule is playing the Rewire Festival in the Netherlands in November.

Live video of Oso Blanco below..