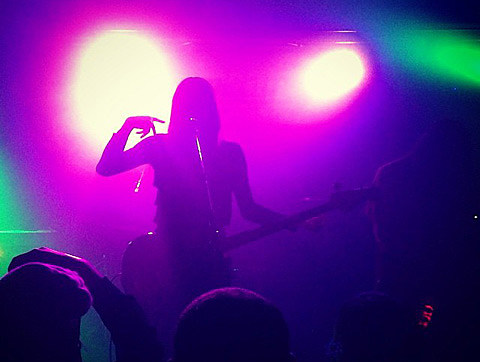 CMJ 2014 is now just a fading handstamp on our inner wrist (and maybe a slight ring in our ears). We've posted photos from our various parties and other shows we caught but we thought, before we put the fest to bed entirely, we'd pick our favorite performers from the week. This year, it just ended up that many of the bands we were looking forward to (and often had play our shows for that reason) were the ones who wowed us the most. Here's our Top 11 bands from CMJ 2014 (in alphabetical order):

Amason: This supergroup of Swedes, featuring members of Dungen, Miike Snow, and Little Majorette, made their NYC debut as part of a "It's a School Night" party hosted by onetime KEXP DJ Chris Douridas. Bowery Hotel is way swanky and the whole thing felt very LA to me (though I haven't been on the West Coast in 10 years). Amason's sound is rooted in piano-driven '70s MOR and the whole thing could've gone the wrong way, but their skilled musicianship and songwriting won out. Even through bad sound and squalls of unintended feedback, they were terrific. Sometimes middle of the road is right where you wanna be. [Bill Pearis]

Beach Slang: Beach Slang are already my personal favorite new band of this year, and their set at our official showcase only confirmed that even more. More so than any band I saw at CMJ, they had a huge chunk of the crowd who knew every word -- even when James Snyder stepped away from the mic -- and their first EP came out six months ago. The band, whose lineup includes former members of Weston, NONA and Ex Friends, play huge guitar rock anthems that recall The Replacements, Jawbreaker, and yes, early Goo Goo Dolls, but once you dive into their lyrics, earworm melodies and thrilling live show you won't be thinking about comparisons. [Andrew Sacher]

Bo Ningen: I don't have the stamina or zeal that most CMJ show-goers do so I limited my 2014 CMJ experiences to about 8 hours of the BV day and night shows on Saturday at Baby's. I am not as much of a music buff as some BV staffers, so I go into these shows completely without prejudice or preference. The highlight of the entire day for me was Bo Ningen. Shrouded in a dense fog and backed by lighting that was either a dull glow or a seizure inducing, blinding strobe, Bo Ningen blasted through a set that was a cross between Syd Barrett era Pink Floyd, early Dungen, and the Boredoms with a dash of anabolic steroids and bi-polar disorder. When silhouetted, Bo Ningen cast a surprisingly intimidating presence with their long hair, ankle length 'skirts,' and frenzied stage acrobatics. Their set was deafening and frenetic but, at the same time, completely cohesive and compelling. And loud. And at times frightening and, when accompanied by brutal strobe lighting, panic-inducing. Within their cacophony, there was definitely a musical structure but it merely held everything together by a thread and gave everything such a loose and frenetic tone. I found the Bo Ningen experience to exhilarating, scary, profound and absolutely unique. [Klaus Kinski]

Cayetana: I hadn't seen Cayetana since before their debut album had come out, and they were good then but this time they were better in every way. Part of it is that it's nice to see them now that I'm familiar with the songs and it was nice to be surrounded by a crowd who also was, but the band is also noticeably tighter and more confident. It can be cliche to say they "get better every time," but Cayetana definitely do and at this rate their future looks very bright. [AS] 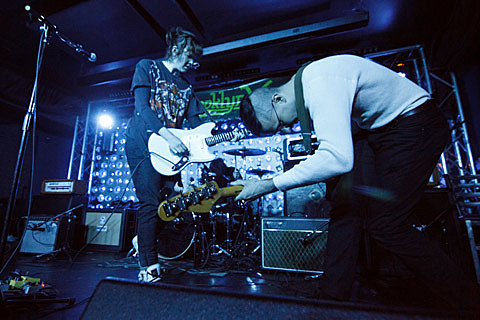 Dilly Dally: Toronto's Dilly Dally were one of the bands we were excited to see, and even as early as noon on a Friday they exceeded expectations. Their sound is great, and not easily pigeonholed. Singer Katie Monks has a voice that can turn into a roar at any given moment, but they're not really a heavy band -- it's more mid-tempo indie rock. That said, they're no slackers on stage either. They're clearly a band who's locked in and look like they belong up there. Only a few Dilly Dally songs have come out so far, but if that set is anything to go by, they may have a pretty promising album on their hands. [AS]

Fat White Family: Fat White Family are the only band on this list I saw twice at CMJ this year -- and within 10 hours at the same venue no less -- and they killed it both times. The Fat Whites look like genuinely gross dudes and they like to remove layers of clothing during their sets (which is all part of the appeal), but they're also excellent, wild performers. Crowd involvement is a part of it up front, and frontman Lias Saoudi often ends up in the audience, but even from the back of the room they're a sight to see. As far as their sound goes, it's kinda like if the Brian Jonestown Massacre had a little more Stooges in them and were on even more drugs. It's great stuff. [AS]

Girlpool: I caught Girlpool twice last week, and they were one of the few bands I deliberately watched a full set of, versus cutting out partway through, which is what usually happens as a photographer at festivals like CMJ. Their lyrics ring true, and are particularly satisfying delivered in catchy harmonies and minimally backed with just guitar and bass. [Amanda Hatfield]

King Gizzard & the Lizard Wizrd: Along with Girlpool, these Australians probably played the most shows during CMJ. It felt like everywhere I went, there was the 'Giz knocking people's socks off, sometimes through sheer momentum and frenetic energy. With with three guitarists, two drummers, two singers and the occasional flute (some of these duties overlapped), they were a psych-garage semi with no brakes down a steep incline. Was there more than one song or just one really long insane one? I can't remember but it's an awesome blur. [BP]

Protomartyr: Total bias alert: Protomartyr's Under Color of Official Right will be my #1 Album of 2014 by a longshot. (Any band that sounds like Mark E Smith fronting a garage Chameleons...but from Detroit, is going to do it for me.) So it may not surprise you that I saw all four of their CMJ shows, all of which were great for different reasons: they played two new songs at Knitting Factory; tailored lyrics of "Tarpeian Rock" to be about BV comments section at our day party at Baby's; inspired a crazy pit at Death by Audio; and just basically blew the lid off Cake Shop where frontman Joe Casey admitted "First time I was at Cake Shop they served Sparks. I got really drunk and yelled at Sean Lennon." [BP]

Tweens: Garage pop trio Tweens aren't the most innovative songwriters, but what they lack in originality they make up for in pure energetic delivery. It's almost impossible to be bored at a Tweens show -- the trio speed through songs and both the band and the crowd are on a total rush. They're tight, they sound full, and they put a lot of power into those sugary songs. I loved them at SXSW earlier this year, but this one blew that away. [AS] 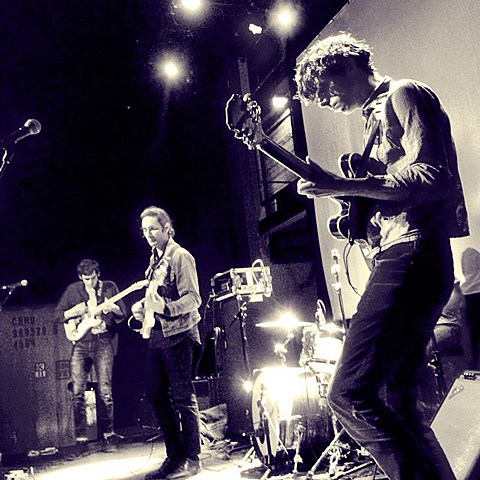 Ultimate Painting: There's a reason bands have been aping The Velvet Underground's style for 40 years -- done right it always sounds great. Ultimate Painting do it very right. Jack Cooper (Mazes) and James Haore (Veronica Falls) embrace their full-sleeve influences (with dashes of early Creation and Flying Nun records) with songs that would've held up back in the day too. While their album is great, hearing and seeing that guitar interplay live is a total jolt of electricity. At their Cake Shop show on Thursday, they even dared to cover The Beatles ("If I needed Someone"), making it their own, too. [BP]

Who were your favorite CMJ bands this year?