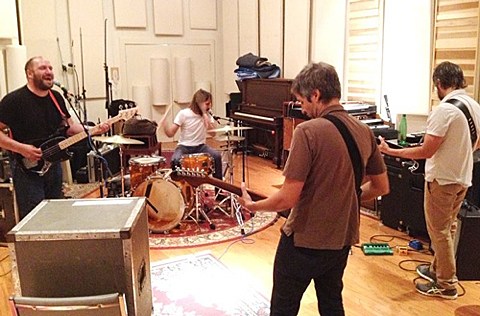 FrontRow: I wanted to ask you about the project with the Kadane Brothers and Will Johnson. Who does what in the band? Or is it everyone sharing everything?

David Bazan: Everyone kind of does everything. You know, generally speaking, live, when we would play shows, I play bass. It seems like Matt (Kadane) and Will (Johnson) alternate on drum duties. Then they play guitar if they're not playing drums. Bubba (Kadane) plays guitar generally. Then in the studio, we all did a lot of everything. The writing is very like ... somebody comes up with this little bit, somebody adds this little bit. The lyrics are a real hybrid of everybody's thing. It will just say who's in the band. It won't really differentiate between who did what.

Overseas is a new indie rock "supergroup," whose lineup includes David Bazan (Pedro the Lion), Will Johnson (who played with David in Undertow Orchestra and also is/was in Centro-matic, Monsters of Folk, New Multitudes, etc), and Bubba & Matt Kadane (Bedhead, The New Year). They released their self titled debut LP this past June, and you can stream that, along with the video for its opening track, "Ghost To Be," below.

Overseas will be doing a short west coast tour in October, but this week they'll be in NYC for two shows: TONIGHT (8/19) at Mercury Lounge and Tuesday (8/20) at Knitting Factory. Opening both shows is folky singer/songwriter Strand of Oaks (aka Tim Showalter), who has opened for and collaborated with Yellow Ostrich and The Tallest Man On Earth in the past year. Tickets to the Mercury Lounge and Knitting Factory shows are on sale now.

All dates are listed, along with the video and album stream, below...

Overseas - "Ghost To Be" Official Video