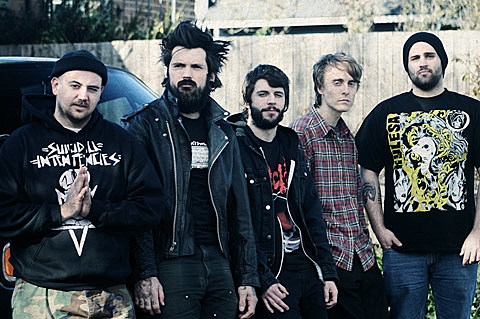 Imagine this: your band, with only a 5" record and a demo to your name, is suddenly put on a comp with bands like Despise You, Extortion, Crom, Lack of Interest, Noisear, and an almost infinite list of grindcore luminaries. Thats where Owen Hart (not the wrestler) found themselves earlier this year. The band was hand-picked by Scott Hull (Pig Destroyer, Agoraphobic Nosebleed) for the second volume of his This Comp Kills Fascists series for Relapse (which dropped on 6/22).

Though they've toiled in the trenches for the past five years, Owen Hart's brutality does not falter on their debut entitled Earth Control. The LP, due on January 18th, 2011 via Vitriol Records (owned by Justin of Graf Orlock), sees the band tackling elements of hardcore, black metal, and groove in their metallic grind, much like they do on the lead track "Methlahem". Download that above and/or stream it below and if you can't wait for the LP to drop, head on over to their Bandcamp page where you can find their contributions to Scott Hull's comp, a 5", and their demo available for streaming/download.

Song stream and videos below...