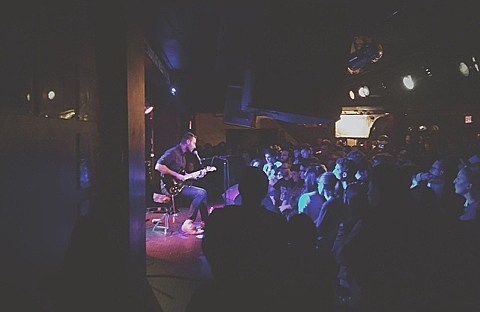 Mike Kinsella is about to headline three sold-out nights at the main 1,5000-capacity room at Webster Hall fronting his band American Football, but you wouldn't know it from the solo show he played as Owen at the venue's smaller Studio room last night (10/9). Mike's been a member of several beloved bands for the past two decades, at least two of which you could call legendary (AF and Cap'n Jazz), but he couldn't have been more casual last night. "I'm a professional musician," he jokingly reminded the crowd more than once. He messed up a lyric once, stumbled over a guitar part later on ("this one doesn't work on an electric guitar"), but those tiny mistakes were only met by laughter from the loving crowd.

And all the casual joking around aside, when Owen played the favorites -- "In the Morning, Before Work," "The Sad Waltzes of Pietro Crespi," "Windows and Doorways" and plenty more -- he had all the charm those songs have on record, and the whole place was singing and swooning along. There was one serious moment though (and Mike pointed out he rarely says serious things at shows), when before playing "In the Morning, Before Work" he brought up Morrissey's recent cancer treatment, as it's one of multiple Owen songs to point out Mike's love for Morrissey ("I listen to my same old CDs, New Order and Morrissey"). Newer stuff was played too, and besides being a good show all around it was a nice reminder before Mike plays 15-year old songs for huge crowds this weekend that this is a guy who put out a great album as recent as last year.