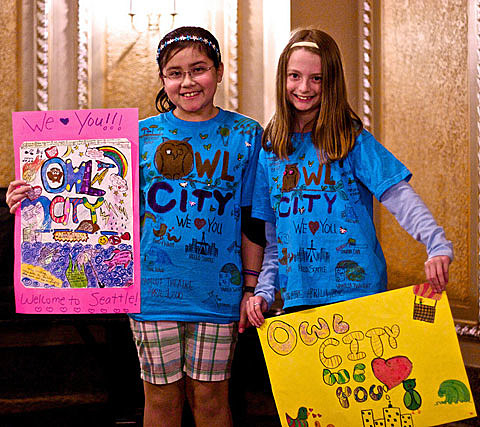 Absolute Punk: I also read online that when you are a fan of Botch, that seems a little different especially for the music that you make. What kind of role do you feel a heavy band like them play on your music? Do you think you will ever try out heavier music or are you going to stick to the softer stuff for now?

Adam "Owl City" Young: I used to play drums in a heavy band called Isle, largely influence by stuff like Botch, Pelican, Neurosis, Isis. Even though bands like that are generally on the opposite side of the spectrum from the music I put out, I think the thing that inspires me still comes though -- the idea of becoming completely lost in the sound. The idea that imagery can be merely suggestive but not so subjective as to tell you how or what to think. It's far more about what the music says to you rather than somebody telling you how to feel. That's really interesting to me...

...Absolute Punk: You also have listed Mogwai as a musical influence, which shows that you are into a wide array of musical tastes. Do you feel like people overlook that based on your music output?

Adam "Owl City" Young: It's funny how a lot of people might assume a given artist only listens to the kind of music he/she creates. That certainly may be the case for some, but for me, it's nearly the opposite. I have a hard time truly enjoying anything I hear on pop radio, or even pop music in general. It's always been tough for me to draw any kind of inspiration from "conventional" music so to speak. Blame it on the stuff I listened to in high school, but for some reason bands like Mogwai or Rachel's or Telefon Tel Aviv are just way more interesting. They payoff is greater. Their songs hold a mystique that three and a half minute radio singles, in my opinion, often tend to lack. Therein was an exciting challenge when I began creating music for Owl City. It was pop music. I'd never made pop music before, I didn't even listen to it, but I wanted to create it because it was new.

Absolute Punk: You also have a tour coming up with Maroon 5 in about a week, and then John Mayer after that. How excited are you for that?

Adam "Owl City" Young: It'll be new territory and I'm excited to see how touring works at that level. I don't know much about either band but I'm looking forward to the tour to say the least.

In related news, Mogwai live DVD will screen in the venue where it was filmed (and other places)