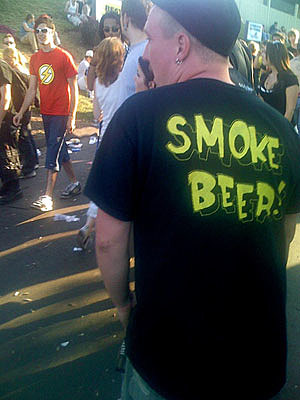 Two men died and 83 people were arrested on Thursday at the Ozzfest concert in Holmdel, N.J., as the New Jersey State Police have stepped up security at the PNC Bank Arts Center to combat under-age drinking.

Raymond Guarino, 26, of Forked River, N.J., and Patrick Norris, 24, of Coram, N.Y., collapsed at the concert and both suffered cardiac arrest. They were pronounced dead at Bayshore Medical Center in Holmdel. Friends of the men said that they had taken cocaine, marijuana and alcohol, said Sgt. Stephen Jones, a police spokesman.

The police have made a total of 229 arrests at concerts at the center over the last week, including Ozzfest. [NY Times]

In Illinois a man was killed by a truck, and in Indiana a 15 year old girl died on her way to see Ozzy.