Black Sabbath in NJ in 2013 (more by Greg Cristman) 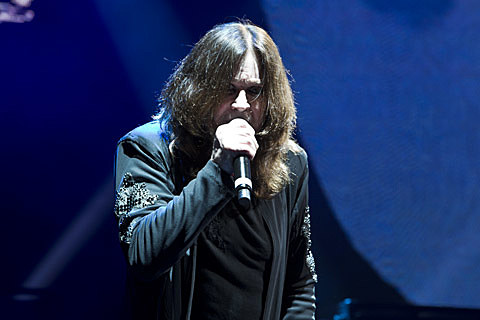 Is the Dark Lord going to be a knight? Will your Photoshop skills land you a place on Geezer Butler's bass? It's a heck of a busy day if you're a Black Sabbath devotee.

First, to UK cyberspace we go, where a petition to get Sabbath singer Ozzy Osbourne knighted is nearing the creator-imposed 5,000 signature threshold on Causes.com. Started by superfan Helen Maidiotis in February of this year, the Angelfire-art-outfitted petition is gaining steam as press and metalheads around the world catch on. The idea behind the venture is to get the attention of David Spooner, Honours and Appointments Secretariat. And, surprisingly, it has. In the campaign's embryonic stages, Spooner suggested that Maidiotis scrap the original plan to knight the entire band and focus her attention on one member. Thus, the petition and The Knighthood of Ozz Facebook page was born.

So far, the push to tack an official 'sir' prefix on the 65 year old granddaddy of metal has drawn support from expected and unexpected sources. Osbourne's daughter Kelly is a noted proponent and former Ozzy guitarist Bernie Tormé has pledged his support with a letter to the cabinet office. The most intriguing development? Maidiotis says even Buckingham Palace is now familiar: "Our campaign has reached Buckingham Palace, as a friend of mine had sent off letters explaining about our battle for Ozzy's knighthood - and they have replied positively." Officials no doubt double-checked to ensure Osbourne hadn't harmed any corgis during his notorious run of '80s debauchery.

The other Sabbath tidbit is Geezer Butler, original/current four-string plucker, is asking interested parties to supply the legend with a new logo. Full details are available at his website, though this PR pic will no doubt pique your interest:

Nice! Right near the tone controls. I don't even think I need to plot this one out.

While you craft your snarkiest 300 / P.S. I Love You joke, relive the glory days of both gods with a 1970 Sabbath concert below...