"Where's the basement?" Ozzy & Jack at The Alamo (photo via @austinzettner) 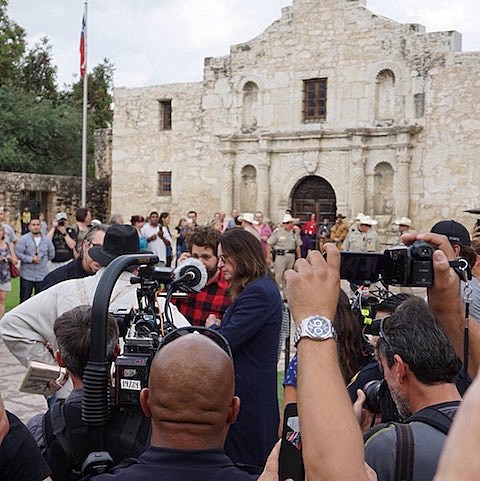 Of the many legends synonymous with Ozzy Osbourne is that of being banned in San Antonio, TX after he peed on the Alamo in 1982 during a photo shoot for Melody Maker. He was allowed back in the city ten years later after he donated to the Daughters of the Republic of Texas, but returned this past week to officially apologize, and to tour the historical site for the first time since he couldn't hold it anymore. It was all part of a new History Channel series Ozbourne is doing with his son, Jack, where they'll roam around the country visiting famous historical sites. (No Drunk History jokes please.) About the show, Ozzy says:

Jack and I are doing a thing for the History Channel, like a father and son spoof on history. We went to Stonehenge and met a guy who thinks he's the fucking reincarnation of King Arthur. And we went to Bletchley Park to see the machine [Alan Turing] used to break the [German] kind. We're going to Mount Rushmore, to the abandoned silos where America used to have their Minutemen missiles and all that. It's educational for me, actually -- history with an Osbourne slant.

No word on when Ozzy's History Channel show will debut but there's news report video of Ozzy and Jack's visit to The Alamo below.

As you may know, Ozzy and Black Sabbath are still on their "final" tour which includes two shows at Madison Square Garden in February and three more NYC-area shows next summer.