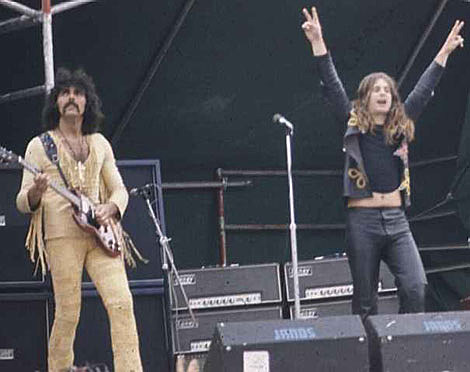 "It is with great regret that I had to resort to legal action against my long term partner, Tony Iommi, but after three years of trying to resolve this issue amicably, I feel I have no other recourse. As of the mid-1990's, after constant and numerous changes in band members, the brand of "Black Sabbath" was literally in the toilet and Tony Iommi (touring under the name Black Sabbath) was reduced to performing in clubs. Since 1997 when Geezer, Bill and myself rejoined the band, Black Sabbath has returned to its former glory as we headlined sold-out arenas and amphitheatres playing to upwards of 50,000 people at each show around the world. We worked collectively to restore credibility and bring dignity back to the name "Black Sabbath" which lead to the band being inducted into the UK and US Rock & Roll Hall of Fames in 2005 and 2006, respectively. Throughout the last 12 years, it was my management representatives who oversaw the marketing and quality control of the "Black Sabbath" brand through OZZFEST, touring, merchandising and album reissues. The name "Black Sabbath" now has a worldwide prestige and merchandising value that it would not have had by continuing on the road it was on prior to the 1997 reunion tour. Tony, I am so sorry it's had to get to this point by me having to take this action against you. I don't have the right to speak for Geezer and Bill, but I feel that morally and ethically the trademark should be owned by the four of us equally. I hope that by me taking this first step that it will ultimately end up that way. We've all worked too hard and long in our careers to allow you to sell merchandise that features all our faces, old Black Sabbath album covers and band logos, and then you tell us that you own the copyright. We're all in our 60's now. The Black Sabbath legacy should live on long after we have all gone. Please do the right thing." -Ozzy

According to the NY Post, "Osbourne is suing Iommi for a 50 percent interest in the 'Black Sabbath' trademark, along with a portion of Iommi's profits from use of the name", and claiming that "guitarist Tony Iommi illegally claimed sole ownership of the band's name, in a filing with the US Patent and Trademark Office. "

Meanwhile, Tony Iommi is currently touring with the rest of Black Sabbath (the Dio years) as Heaven and Hell. They hit NYC at the end of August.