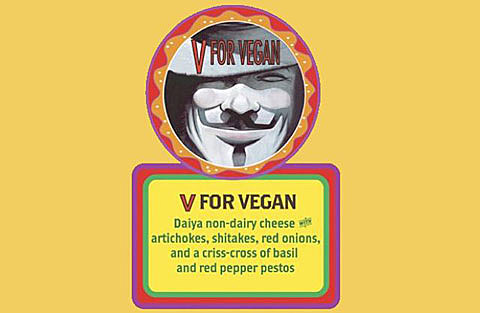 [Ozzy Osbourne] has turned over a new leaf, literally, by embracing a vegan diet for what the Prince of Darkness cites as health reasons. Reportedly, after his assistant showed him the vegan documentary Forks over Knives, Ozzy decided that it was time to cut meat, fish, dairy and anything else derived from animals out of his diet. Speaking on Sharon Osbourne's chat show, The Talk, the singer revealed that he his feeling the benefits:

"I feel OK actually, I feel better about myself, you know? I go on binges. That's the reason why I decided to cut out meat out and dairy because I've limited what I can have because when you're on the road and you're travelling, you grab buns and... burgers are everywhere... so now I've just narrowed the margin."

Ozzy's new lifestyle choice comes hot on the heels of the news that he and his Black Sabbath alumni, Tony Iommi, Geezer Butler and Bill Ward may begin rehearsals for a final reunion tour.... If Sabbath do hit the road again, Ozzy may find some camaraderie from his new dietary choice in band member Geezer Butler. The bassist is a longstanding vegan, and has appeared in advertising campaigns for P.E.T.A. [Ultimate-Guitar]

Look for Ozzy and Tony (and Bill Clinton) trying out the new vegan pie at Two Boots all this month.