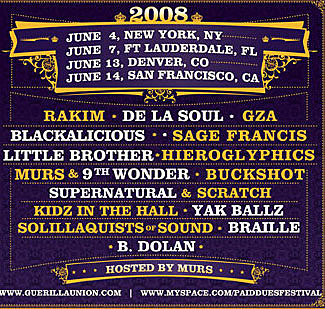 The PAID DUES independent hip-hop festival, promoted by MURS 3:16 in association with Guerilla Union (Rock The Bells, Cypress Hill Smoke Out) and powered by SanDisk, have announced it has expanded throughout June with a festival series in New York, Ft. Lauderdale, Denver and San Francisco. Tickets to these additional dates go on sale SATURDAY APRIL 19.

After wrapping up its third sold-out annual Southern California festival date on March 22, artists included on the line-up such as SAGE FRANCIS, LITTLE BROTHER, HIEROGLYPHICS, BUCKSHOT OF BOOT CAMP CLIK, and YAK BALLZ will appear on these additional festival series dates as well. Also confirmed to join on select dates are RAKIM, DE LA SOUL, GZA, BLACKALICOUS, SUPERNATURAL & SCRATCH, KIDZ IN THE HALL, SOLILLAQUISTS OF SOUND, and BRAILLE with MURS & 9th WONDER to host. Check www.guerillaunion.com/paiddues for up to the minute information about talent lineup.

Dates and venues for the Paid Dues Festival Series are:

Artists BUCKSHOT, 9th WONDER, KIDZ IN THE HALL, and BRAILLE have all signed onto the festival series in support of their upcoming album releases. BRAILLE�s �The IV Edition� is expected to hit stores APRIL 15 with a release by BUCKSHOT & 9th WONDER titled �THE FORMULA� to follow on APRIL 29. KIDZ IN THE HALL are set to put out �THE IN CROWD� on MAY 13 to close off the pre-festival series releases.

Rolling into its third year, PAID DUES supports a fan base of a vibrant scene of underground hip-hop artists all on one platform. Called "A conscious hip-hop love-in" by Flavorpill, it supports this genre of music largely shunned by the mainstream media. Here, advanced lyricism, stinging political commentary and quality DJ performances flourish in a seemingly parallel universe. In 2006 the first PAID DUES festival with a line-up featuring Felt, Aesop Rock, Living Legends, El-P, Hangar 18 and more, sold out with over 5,000 concert goers packing the Shrine Expo Center in Los Angeles. The following year MURS and Guerilla Union, along with performers Felt, Living Legends, Sage Francis, Brother Ali and others, teamed up again for the PAID DUES festival tour for over ten dates across the country. This summer, PAID DUES seeks to expand its national presence with its festival series in select cities.

"We are very proud to continue this partnership with Murs by expanding the Paid Dues independent hip hop platform to a festival series in select cities. We are introducing Paid Dues as a festival series with acts whom we feel champion the independent hip hop scene. Rakim and De La Soul not only pioneered the hip hop movement, they epitomized the DIY spirit long before the trend became common," states Chang Weisberg of Guerilla Union. "Add in the rest of the bill and you have a platform of artists that truly illustrates what Paid Dues is about. With SanDisk's ongoing support, the mission to both educate conscious music fans to capture and share content; and empower artists to produce and share that content in new ways continues to strengthen our community to "Wake Up Your Phone"."

Murs adds shortly but sweetly, "It's summer. It's Hip Hop. It's going to be a good time."