Paint It Black at Highline (more by Toby Tenenbaum) 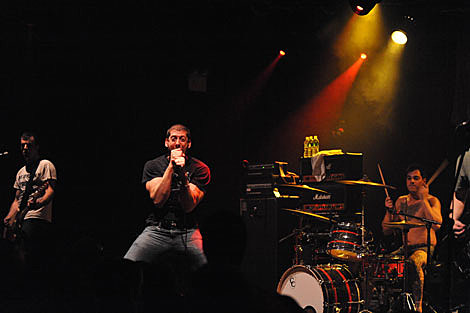 Paint it Black is back in action and playing a handful of shows in February and March. Dan Yemin and crew will hit Death By Audio on March 4th bringing along Punch, Iron Chic, Vaccine, and Zombie Dogs. $10 gets you in the door, and as the Facebook RSVP can attest, this show will sell-out, so get there early! All dates below.

Vaccine's lightning fast demo 7" ripped (download a copy), and though that 7" is sold out, the band has their Human Hatred 7" up for sale. Pick up a copy. A few more Vaccine dates are listed below.

On a punk-related note, Tim Barry of Avail fame is touring and scheduled to play Mercury Lounge on Apr 16. Tickets are on sale. The show is one of a few scheduled dates on the East Coast following an Australian/New Zealand tour with Chris Wollard and Addison Burns. All dates below.

Rival Schools are touring in March.

Glassjaw are returning to Best Buy Theater and Starland Ballroom in March.

The Bouncing Souls had to reschedule their 'Home for the Holidays' shows happening in Asbury Park due to the snow in December (the same snow that still keeps getting higher). The new dates are still on for February. Check Ticketmaster for tickets to the new dates entitled "the Snowout Blowout."

Meanwhile, head over to ABC No Rio and catch a HC and Punk matinee.

Speaking of Asbury Park, another multi-day festival will be happening in that town this fall. Full linuep of "I'll Be Your Mirror" still TBA, but tickets go on sale Friday for the events that will feature at a minimum Portishead and Jeff Mangum.

Tour dates and some video is below.