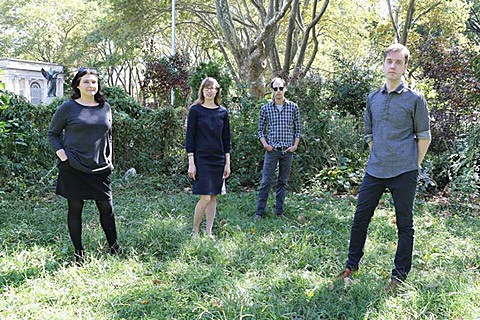 Brooklyn-based indiepop band Pale Lights, which features sometimes Comet Gain member Phil Sutton and Crystal Stilts' Andy Adler, released a new 7" titled "Fourteen Stories Tall" at the tail-end of 2014 which is another fine example of the band's jangly sound (think Lloyd Cole, Felt, Camera Obscura). You can stream it (and its b-sides) in full, along with last year's Before There Were Pictures album, below.

Pale Lights have a couple NYC shows coming up. This Saturday (1/24), they'll play a free show at Friends and Lovers with Ladybug Transistor offshoot Olson, Rydholm, and Forester and Great Lakes. That's an early show from 7 - 10 PM.

Then on February 7 at Cake Shop, Pale Lights are part of a celebration for The Big Takeover's 35th anniversary. Also on the bill are fellow Brooklyn band The New Lines, plus Quebec's Jet Black (who roar like Swervedriver), and Sacramento, CA's Soft Science (also shoegazey but but more on the dreamy side). You can stream recent releases from Jet Black and Soft Science below as well. That show is $8 at the door.

Both Jet Black and Soft Science are coming to NYC just for The Big Takeover show. (Let's hope there are more Big Takeover 35th anniversary events on the way.) Song streams below...