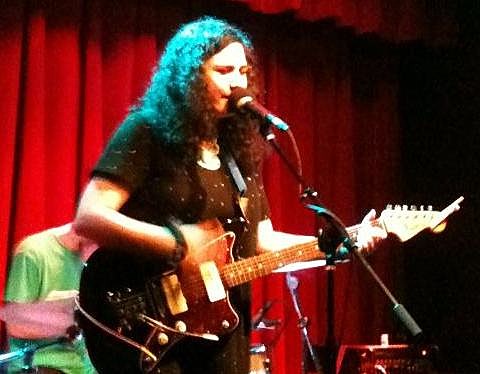 Palehound just played a day party at Spike Hill (10/17), and though there couldn't have been more than ten people there, the band weren't fazed at all, and still put on a solid show. And emphasis on the word "band." Though Palehound was conceived as the solo project of Ellen Kempner, they're a full band now, and quite an adept one at that. Ellen's songwriting feels rooted in folk traditions, but the band expands upon that, working through loud-quiet-loud dynamics and slightly mathy tendencies. It's still a bit surprising that such a complete sound comes from such a new, still relatively unknown band, but hopefully they won't be playing to crowds of ten people much longer. Music like this doesn't deserve to go unnoticed.

Palehound, one of our "30 Artists Worth Checking out at CMJ," have two more shows coming up this week, including a night show at Pianos on Friday (10/18, 7:30 PM) and the Exploding In Sound show at Silent Barn on Saturday (10/19).