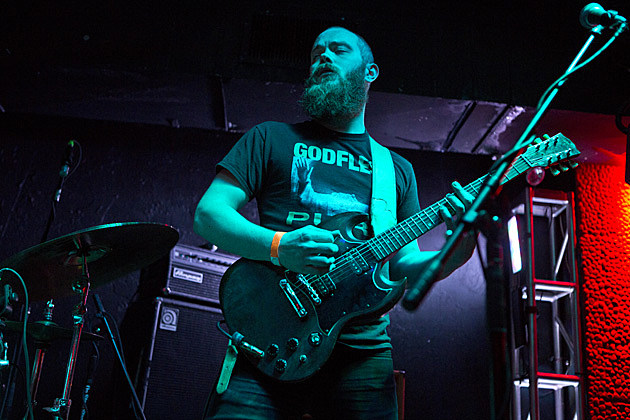 Arkansas doomsters Pallbearer, whose 2012 debut album Sorrow and Extinction was one of the buzziest metal albums of that year, are about to hit the road with another buzzy metal band, Deafheaven, with Wreck & Reference along for the ride too. That tour doesn't hit NYC but Deafheaven play Governor's Ball and Pallbearer will play a Northside Festival show on June 12 at Europa, presented by Pitchfork's Show No Mercy & Hell Awaits. Also on the bill is Hull, Planning for Burial, Yellow Eyes and Vilkacis. Tickets are on sale now or you can also try to get in using your Northside badge. All Pallbearer dates are listed below.

Meanwhile, that Northside show is one of three chances to catch Planning for Burial, whose excellent new album can be streamed now, in NYC. He also plays the Metal Cats release party at Union Pool on Saturday (5/17) and his tour hits Grand Victory on July 7 (tickets).

Speaking of Hull, the band play Brooklyn's Saint Vitus on Saturday (5/17) with Bloody Hammers. The show, dubbed "Liz & Luis: The Unholy Fucking Union," is actually an afterparty for a wedding but is open to the public. If you go, please give the happy couple your congratulations. Tickets are on sale.

Updated Planning for Burial dates are also listed, with the list of Pallbearer dates, below...