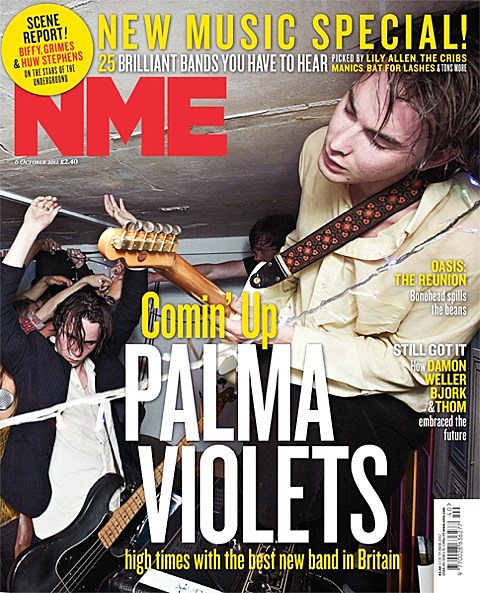 What we're all falling in love with in here is a sound centred around echo-laden guitars, Spiritualized-style Farfisa organ and basslines picking out instantly euphoric, simple chord sequences. Oh yeah, and singer Sam Fryer's voice - Ian McCulloch, Jim Morrison - and the way it rises into ecstatic shrieks that launch the band into similarly ecstatic psych-garage freakouts. There are already five or six awesome songs - direct, clever/simple, totally fresh'n'new-sounding fired-up rock'n'roll of the type we've been waiting for. They finish with a cover of Eddie Cochran's 'I Remember', and then everyone screams, so they play another tune that goes, "I've got a brand new song, I've got a brand new song". Except literally everyone here knows all the words already.- [NME]

"The best new band in Britain," according to NME, are Palma Violets who so far only have a double-a-side single out, both sides of which you can stream via YouTube below. At the start of the quoted-above review, NME actually begins with "OK, yes, you might think we at NME have a tendency to get over-enthusiastic about bands sometimes," but then goes on to say they're sure they're right about these guys. "It's time to get very excited."

That was written back in April and the mag has stuck with them, and just named that single, "Best of Friends," as the NME's #1 single of 2013. (Tame Impala's Lonerism was the #1 album.) With the UK in the throws of hype-fueled rapture, it's time for America (well the Northeast at least) to get very... cautiously curious. Palma Violets will be coming over in January for a few North American dates, including Shea Stadium on January 19 (no word on advance ticktets yet) and two shows at Glasslands on 1/23 and 1/28 and tickets to both Glasslands shows are on sale now.

UPDATE: The second Palma Violets Glasslands show got moved from 1/30 to 1/28 and changes were made in this post to reflect this. The Suzan is now playing at Glasslands on 1/30.

The 1/23 show is with Canadian funsters Hollerado and the 1/28 show has El Sportivo on the bill. Right after their stateside visit, Palma Violets will release their debut album via Rough Trade which was produced by Pulp's Steve Mackey. They'll also be part of the NME Awards Tour 2013 in February which packages a bunch of new bands together and trucks them around the UK. In this case, Django Django, Miles Kane and Peace.

The full list of for the NME's tracks of the year is below, along with a Spotify playlist, along with all tour dates, Palma Violets' videos and a live clip as well.