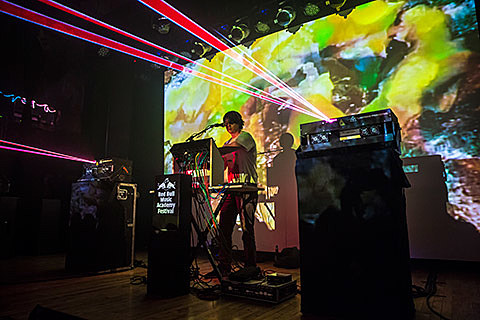 Photo: Panda Bear at Warsaw in 2014 (more by PSquared)

Panda Bear is a week away from releasing his new album, Panda Bear Meets the Grim Reaper (due 1/13 via Domino), and two days before it comes out he'll play a Boiler Room-presented NYC show at MoMA PS1 on Sunday (1/11), part of the museum's Sunday Sessions. The one-off show goes from 3:30 PM to 6 PM, and will feature Panda Bear joined by his frequent visual art collaborator Danny Perez's work. Tickets are on sale now, and if you can't make it, you can strema it live via Boiler Room.

Panda Bear has been rolling out his new album by premiering tracks from it on different radio shows this week. You can check out the newly-premiered "Sequential Circuits" on Mary Anne Hobbs' BBC Radio 6 show. It starts at the 1 hour 23 minute mark. Video for lead single "Mr. Noah" below...