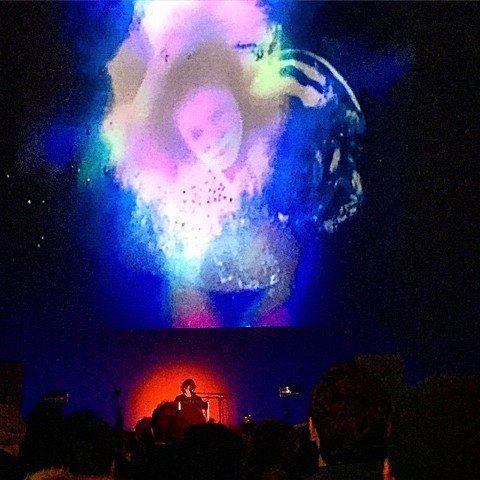 Panda Bear releases his new album, Panda Bear Meets the Grim Reaper, this week via Domino, and yesterday he stopped by NYC's MoMA PS1 for a Boiler Room-presented show with visuals by frequent Animal Collective collaborator Danny Perez. He focused mostly on the new album, but included a few from its predecessor, 2011's Tomboy, too. Boiler Room has an archived video streaming on loop, which you can watch below.

Panda Bear's been gradually premiering tracks from the album on different radio stations around the world, and if you haven't found yourself a full listen yet, you can check some of those stations for archives. It's a great album, different from all his others but still within the electronic/psychedelic pop realm of his last two. Like Tomboy, it's more song-oriented than Person Pitch, but the songs are also clearer and bigger here than on Tomboy. "Sequential Circuits" (listen at BBC at the 1 hour, 23 min mark) is a beautiful opener, with chord changes that sound both unconventional and genuinely uplifting. Another immediate highlight is "Tropic of Cancer" (listen at FBi Radio), a "God Only Knows"-type ballad but based more on the "Hallelujah" chord progression. Elsewhere, there's the head-knocking "Crosswords," the ambient pop of "Lonely Wanderer," the weirder, grimier "Boys Latin," the bouncy avant-pop of "Selfish Gene," and plenty more strangely melodic sounds. Check out those streams linked above, and watch the videos for two other tracks below.

Also in honor of the new album, Panda Bear made a FACT mix which includes 13th Floor Elevators, Aphex Twin, Andy Stott, Gobby and more. You can stream that, with the tracklist, below as well.