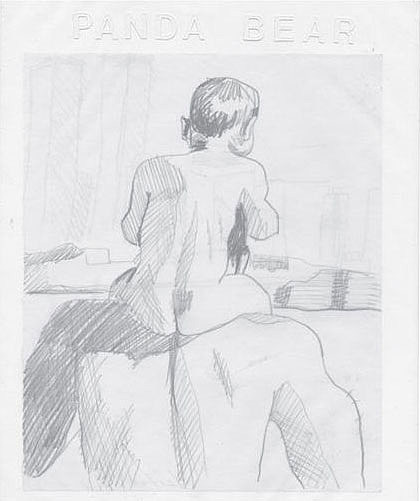 And now comes, "You Can Count On Me", the second in the series of 7" singles from Panda Bear previewing his forthcoming album Tomboy, the much-anticipated follow-up to Person Pitch.

A gentle duet between Panda Bear and himself, "You Can Count On Me" glimmers with third world melodic overtones, an ethereal uplifting number that is over before you become too familiar. "Alsatian Darn" on the other hand is a much different creature...a slightly foreboding track with an off-beat melancholy chord progression that occasionally lets the light break through with a jaunty two-step, if ever so briefly.

A limited edition of "You Can Count On Me" will be available in stores beginning October 19th. Only 500 copies are available for pre-order from the Domino Mart.

The news of Panda Bear's new single (that's the cover art above) coincides with a week's worth of live shows kicking off Saturday, 9/4, at FYF Fest in LA. Though originally they were saying Tomboy would be out in September and then October, there doesn't seem to be an actual release date scheduled at the moment. Just the single for now. .

Not counting Moogfest on 10/20, Panda Bear's last tour date is 9/12 in Baltimore which is one day after the 9/11 show at Governors Island in NYC. And since we last spoke, there have been a lot of updates related to that NYC show. Not only will there be opening sets by Teengirl Fantasy and Gala Drop, Panda's Animal Collective bandmate Avey Tare will be DJing between sets. Tickets are still on sale, AND we have a pair you can win. Details at the end of this post.

And speaking of 9/11 NYC shows by Domino-signed bands that I have a pair of tickets to giveaway for, Dirty Projectors and Owen Pallett play Terminal 5 on that Saturday. Details on winning those tickets (you can buy those too) below.

This limited edition Bitte Orca expanded 2xCD set comes with premium packaging and a second disc that features never before released tunes from a very special and intimate live acoustic performance at New York's Other Music record store, rare vinyl only b-sides and a stunning cover of Bob Dylan's "As I Went Out One Morning". This is the definitive version of Bitte Orca.

Witness the first ever live New York performance of DETROIT IN EFFECT!!! With several releases on CLONE, after more than a decade, witness D.I.E. in full effect! Pure Detroit electro tracks in the tradition of Juan Atkins Model 500 project and AUX88 and the likes. Detroit in Effect pure Detroit Electro Techno that bring back the funk in techno and electro!

Get on the Detroit Party Train with these heavy bassed Cybotron inspired electro tracks!

TEENGIRL FANTASY make dream music. With a beat. They play a crazy, fun live show. Experience it for yourself!

All Teengirl Fantasy dates below.

Gala Drop are coming all the way from Panda Bear's current home, Lisbon, to open the Governors Island show though they will play at least one other show while they're here, and that takes September 10th in Chinatown at a No Ordinary Monkey party.

--
Dirty Projectors - Stillness Is The Move