Parenthetical Girls at Glasslands on 12.1.11 (via Jonathan Graves) 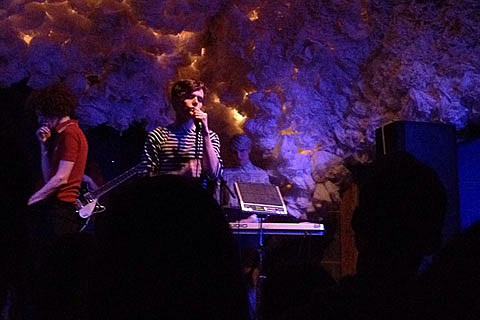 Parenthetical Girls recently kicked off an east coast tour which brought the band to the NYC-area three times so far, for a Glasslands show (pictured above), an early show at SUNY Purchase (12/3) and a night show at Santos the same day.

I caught their set at Purchase, which opened with singer Zac Pennington crouched inside of a clear plastic box singing "Sympathy For Spastics" with little more accompaniment than light piano lines from keyboardist Amber Smith. While he was under the box, he fogged up the front of it and scribbled the word "metaphor" with his finger, the first of many semi-sarcastic tropes of the set (another great one being when he kicked over a pawn from the student center's giant chess set). Zac's other antics included running into the audience and different rooms of the student center. The band's hour long set was made up mostly of the material from their Privilege EPs, though they reached into their back catalog for a couple of songs and covered The Smiths' "Handsome Devil."

Parenthetical Girls will be back in NYC TONIGHT (12/6) at Shea Stadium with Sam Mickens (who was also on the Purchase show) and guests. Updated dates below.

Speaking of The Smiths, the box set of their complete discography is out now and guitarist Johnny Marr has been banned from driving for 56 days due to being caught doing 72mph in a 40mph zone and pleading guilty. He's also been fined £535.

All PG dates and a clip of Zach singing in the photobooth at Glasslands, below...