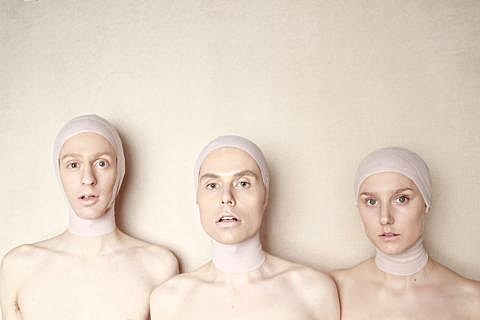 Portland art pop ensemble Parenthetical Girls will release their new album, Privilege, on February 19 via the band's own Slender Means Society imprint. The record was originally recorded and released as a series of five limited edition 12" EPs (hand-numbered in the blood of the group's members!), Privilege condenses those into a 12-track album. The band's Zac Pennington spoke with Vol. 1 Brooklyn about the new album:

The new album is taking a very interesting form, as a series of hand-released albums that can only be ordered directly from you, and can't be found in stores. What made you want to take up this challenge?

The Privilege series--like basically every harebrained project we undertake--was a product of necessity. Or at least that's how it felt at the time. A very dear friend of mine once passed on a piece of advice that he got from his graduate advisor at art school: if you're ever stuck or feeling blocked, a good way out is to start a series. A series of anything. This is that solution taken to an absurd extreme.

Having made a somewhat disillusioning bid toward a more conventional means of releasing music with our previous album, we wanted to experiment with less traditional methods of production and distribution, methods we couldn't rightly expect anyone else to want to pay for. Parenthetical Girls have been doing these kinds of things for ourselves for quite a long time now--DIY not for any kind of romantic idealism, but because I am extremely impatient, and probably a better administrator than musician. - [Vol. 1 Brooklyn]

You can stream a couple songs from Privilege below, and watch a "commercial" for the album that seems to be inspired by those old Brooke Shields Calvin Klein jeans ads. Parenthetical Girls have just announced a North American tour that will swing through SXSW before coming to NYC for two shows: Glasslands on March 25 and Bowery Electric on March 26. No word on Bowery Electric tickets yet but tickets for the Glasslands dates are on sale now.

A list of all Parenthetical Girls tour dates, the album commercial and song streams, below...