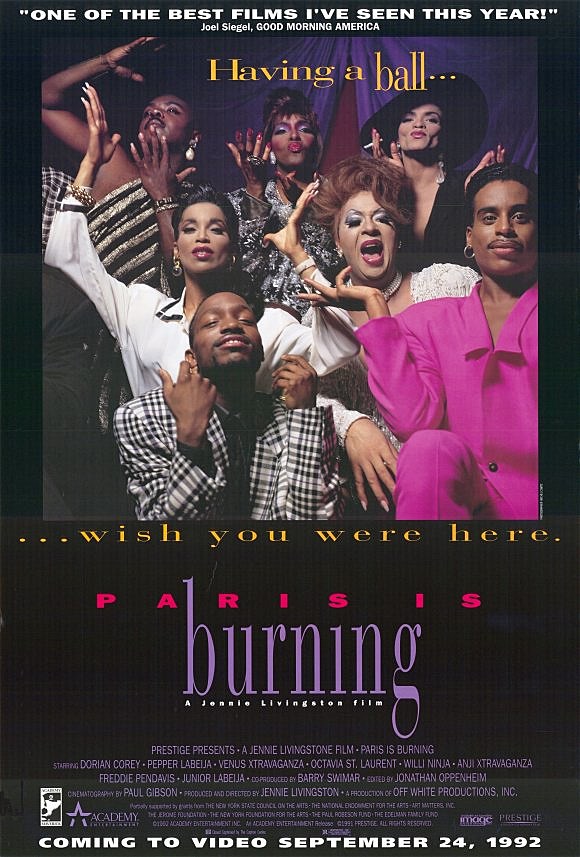 One of the events in this summer's Celebrate Brooklyn! at Prospect Park series is a free screening of Paris Is Burning on June 26, which initially also included a live set from Le Tigre's JD Samson. JD already dropped off the show after comments on the Facebook event page criticized the promoters for not including any queer trans people of color (QTPOC) on the lineup. (If you aren't familiar with Paris Is Burning, to quote Wikipedia, "it chronicles the ball culture of New York City and the African-American, Latino, gay, and transgender communities involved in it.")

A Change.org petition was also launched around that time to get the event cancelled. A few of their concerns included:

- Although NYC's LGBTQ communities are majority TQPOC and NYC's Ballroom community mostly black and latinix gay men, transsexual women, trans-feminine folks, trans men, trans-masculine folks, and queer women, the event was initially slated to feature a line-up that included NOT ONE PERSON from the documentary or the present THRIVING ballroom community and NO PERFORMERS OF COLOR. This is an erasure of our communities which this documentary purports to be representing.

- We are also concerned that this is a pro-gentrification event since the music/acts chosen to accompany the screening were geared towards the tastes of new white middle-class residents of Brooklyn and did not culturally reflect the indigenous existing TQPOC communities of Brooklyn or within the film.

- While Jennie Livingston and Mirimax profited immensely off of this anthropological foray into the lives of low-income TQPOC ballroom members, through years of lies and dishonesty, Livingston was able to use people for the sake of her own fame and has been living off of their stories ever since. In the meantime, most of the original cast has been murdered or has died in poverty. This is exploitation of a vulnerable population who trusted Jennie to do right by them.

You can read more here. The petition also asks Celebrate Brooklyn/BRIC to apologize to the affected parties, cancel the event, and "fund an event that is curated and staffed by the communities harmed by this event." It also asks Paris Is Burning director Jennie Livingston to apologize, "use the platform that you've gained through our stories to speak out against the atrocities that are killing us daily," and "pay retribution to the survivors and communities of the people you exploited in Paris is Burning with all future proceeds."

The petition notes JD's decision to remove herself from the event, but asks her to "remember that accountability is a gift and that you should continue to seek ways to be accountable to the trans-feminine communities you've hurt historically if you seek to call yourself an 'activist' and 'ally'."

BRIC has been listening to and learning from the online discussion about our planned June 26 screening of Paris is Burning and the surrounding line-up. We understand now that the original line-up should have included members of the ballroom and QTPOC communities, who are the subject of Jennie Livingston's path-breaking documentary.

Having recognized that we made a mistake in the planning of this program, we have been working to figure out how best to right our course. We have now done what we should have done when we initially planned the event: reached out to QTPOC organizations and individuals, and members of the ballroom community, to gain their insights and hear their ideas for the program. We apologize for not having done so earlier.

After this consultation, the revised line-up, which we hope to finalize in the next few days, will include artists and programming from the QTPOC and ballroom communities.

You can read the rest of their statement here, but meanwhile that revised lineup was just announced and looks like this:

BRIC's screening of the Sundance Grand Jury Prize-winning documentary Paris Is Burning will feature an introduction by director Jennie Livingston and by Junior LaBeija and Dr. Sol Williams Pendavis, both of whom are featured in the film. Before the screening, fellow Paris Is Burning cast members Grandfather Hector Xtravaganza and Jose Disla Xtravaganza present The Houses United Ball: Celebrating Brooklyn, which will feature members of the Houses of LaBeija, Ninja, Mizrahi, Khan, Infinity, Milan, Princess and Xtravaganza. Vjuan Allure will DJ before and during the ball.

It's unclear at the moment if the petition will be taken down now that the lineup has changed.