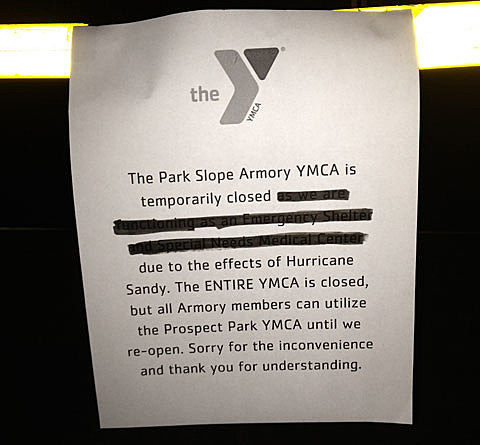 The Hurricane Sandy evacuees that were staying at the Park Slope Armory YMCA have moved out of the building and it will reopen soon to YMCA members -- but officials don't know exactly when.

The last of the evacuees -- many of whom were elderly people from senior homes in the Rockaways damaged in the storm -- left on Sunday, according to City Councilman Brad Lander. One group moved back into an adult care facility, and two other groups will stay in "transitional housing" at other assisted living facilities while their buildings are repaired, Lander said in an email.

The Armory, which usually houses a YMCA branch complete with an indoor running track and spinning and yoga classes, will reopen "as soon as possible" to its members, a spokeswoman said, but she declined to speculate on an exact date.

A bit of good news at least (for the shelter residents, and the YMCA members).

Park Slope residents (or anyone) looking to still lend a helping hand can do so via Congregation Beth Elohim who have been posting sign up sheets with jobs ranging from "Food Preparation in the CBE Kitchen" to "Volunteer for Field Work in Coney Island." If you choose the latter, just make sure to stay healthy.

As always, Occupy Sandy (who held a big benefit concert over the weekend) can also use your help.