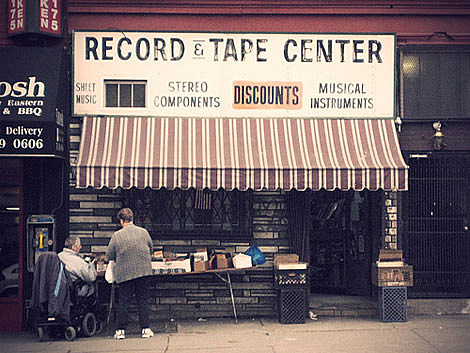 It's nearly the day the music died in Park Slope.

The Record and Tape Center, a dusty, cramped record store that has occupied the same spot on Fifth Avenue, near Ninth Street, for the past 38 years, will be shuttered by May 31, the result of an eviction notice that store owner Tony Mignone said came out of the blue.

"The letter just arrived at the beginning of the month," said Mignone, who opened his store on Fifth Avenue and Sixth Street in 1965, and moved to his present location in 1971. "I've never even been late on my rent!"

According to the letter, the landlords, a family that owns several grocery stores in the neighborhood, including the Deli and Smoke Shop next door, do not want to renew the lease and will take Mignone to court if he does not clear out.
Brooklyn Bridge Realty

This is the saddest record store closing news I've heard in a while, even if admittedly every time I stop in the Record and Tape Center I think, "how is this place still in business?" I'm always so happy it is though..

I would have probably last stopped in if I had made it to the Park Slope 5th Avenue Street Fair (and Southpaw record fair) that happened on Sunday (but I didn't).

The Virgin Megastore in Union Square will basically be closing the same day.