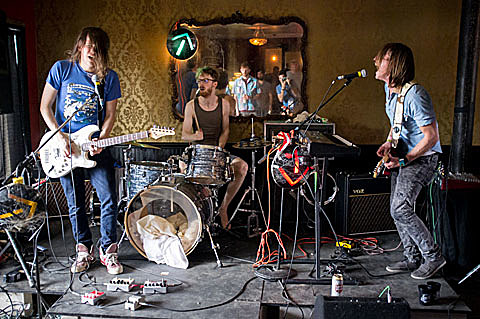 Montreal's Parlovr are visiting NYC, playing Glasslands TONIGHT (5/30) with Mainland, We Run, and The Drowners. Tickets are still available. It's a one off show for the band before they head out on a tour of the US and Canada in June.

Parlovr just released their second album, Kook Soul, on Dine Alone records. The album was a long time coming for the band, starting two years ago when the band were on the verge of breaking up, reveals a story in the Montreal Mirror:

...they continued touring in support of an album they were tired of, forced to spend long hours on the road--not an ideal situation for a pair of combustible personalities at drastically different points in their lives. Alex Cooper had pencilled in a wedding date with his longtime squeeze, only to have her end it. Louis Jackson, by his own admission, "was becoming a complete whore." A van ride from Brooklyn to Providence on a blistering July day almost sealed the group's fate.

"Every single word uttered devolved into petty arguing, and we still had six hours to go. [Drummer] Jeremy [MacCuish] was in the back, I don't know how he put up with it," recalls Cooper.

"It was also the hottest day of the year in New York," interjects the stoic MacCuish, with only a faint hint of exasperation. "It was bumper to bumper through Connecticut because everyone was driv­ing to the beach, and the air-conditioning was broken."

The band sorted things out, obviously, and Kook Soul is a big step up from their self-titled debut, influenced heavily by repeated listens to The Flaming Lips' The Soft Bulletin and old '50s records. The songs sound good live too -- I caught Parlovr a couple times during SXSW this year. Check 'em out if you can.

You can stream Kook Soul below, and check out all listed Parlovr tourdates.