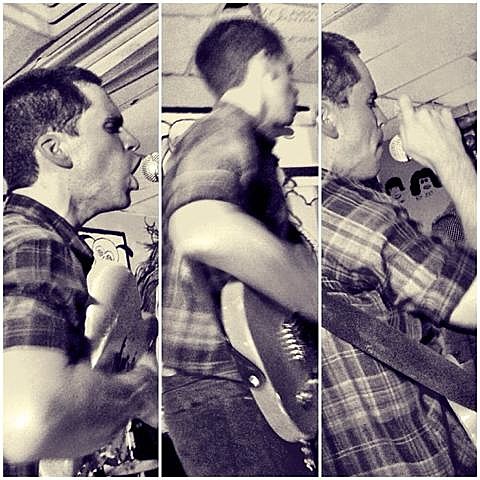 Parquet Courts released their debut album, Light Up Gold, over the summer and has made its way into almost daily rotation at my house and a guarantee for my 2012 Favorite LPs list. As much as I like Andrew Savage's other band, Fergus & Geronimo, and their most recent album, Parquet Courts are a little more immedate and focused and rockin'. As I wrote before:

Where F&G are a catchall of whatever styles Savage (and Jason Kelly) are into at the time, Parquet Courts definitely have a sound: nervvy '80s style American indie, the kind found on labels like SST and Homestead and occasionally made by Camper Van Beethoven when they weren't hippie-ing out. (Early Pavement too, for that matter.) Savage and Austin Brown don't so much sing as yell which works perfect with the tension filled music that's ripe for spazzy dancing

If you haven't heard Light Up Gold Yet, you can stream the whole thing at the bottom of this post.

Now that Fergus & Geronimo's tour with Jaill is over, Savage is putting the focus back on Parquet Courts who have a number of shows coming up, including a few in NYC: Friday (10/5) at Dead Herring with Jeremy Smoking (mems PC Worship), Psychic Blood and Heaven's Gate; October 12 at Living Bread Deli with Psychic Boots; a CMJ-week show on October 18 at Death by Audio with The Intelligence and Viva L'American Deathray Music; and October 21 at Shea Stadium with Ringo Deathstarr, Juan Waters and Son of Salami.

There's a few other dates which are listed below along with the Parquet Courts album stream.