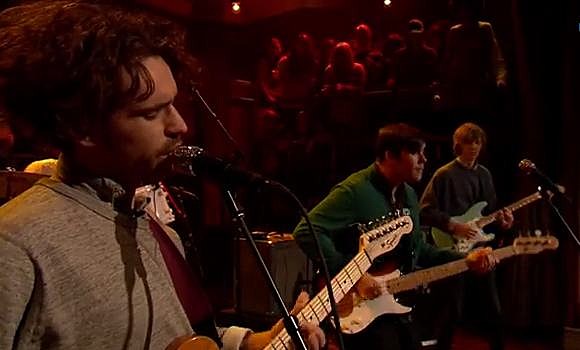 Parquet Courts had a pretty good 2013. Their debut album, Light Up Gold, ended up on a lot of Best Of lists (even though it came out in August 2012),  their new EP, Tally All The Things That You Broke, was a quality follow-up and they went from being openers to headliners. As a capper, last night (1/9) the Brooklyn-based band made their network television debut on Late Night with Jimmy Fallon, playing the jammy, highly-quotable "Stoned and Starving." You can watch that below.

Parquet Courts will play Brooklyn's tiny Acheron on Tuesday (1/14) (sold out) which will serve as a warm-up to some West Coast dates with Destruction Unit (who play Brooklyn tonight) before heading to Australia and New Zealand. Those dates are listed, along with the Fallon video, below...