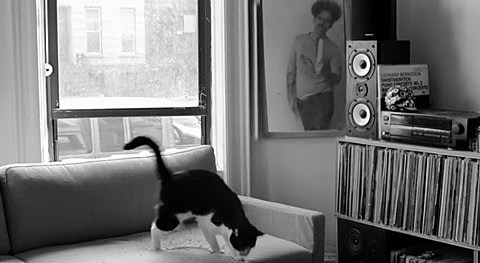 Most everyone likes internet cat videos (perhaps you were just watching one), and Parquet Courts have now added to the bandwidth via the video for "Sunbathing Animal," which is the title track of their new album, due June 3 via What's Your Rupture. The video, co-directed by Andy Capper and PC singer Andrew Savage, stars Savage's cat, Frida, who didn't do as much sunbathing as they'd hoped. Savage tells Noisey:

Every afternoon [Frida] takes a nap in that spot, but that afternoon she knew she was being observed. So I created a special tea that I found on a cat lady website that was full of herbs that could allegedly make a cat sleepy. You got some valerian root, some poppy seed extract, skullflower caps, chamomile.... I gave that to her and she was kinda being a bit more chill but she was still moving around a bit too much. And I guess we basically made the sofa area of my apartment into a cat paradise in order to get her to perform. We had bird songs playing on the iPhone, the window was open for bird noises outside. We put some food on the couch and then finally some cat nip.

You can watch the video below. If you've played the mostly-one-chord "Sunbathing Animal" to death, Parquet Courts will premiere a new song on Late Night with Seth Meyers on April 30. The show, which only has musical guests twice a week, hasn't had the most exciting rock booking so far. (Though I think it's pretty solid otherwise.) So let's hope this is a turn for the more interesting as far as that goes.

NYC's next chance to see Parquet Courts is at Bed Stuy's Sugarhill Supper Club on June 11, with a hand-picked line-up featuring tourmates Protomartyr, plus Future Punx, and Xerox. Tickets for that show are now on sale.