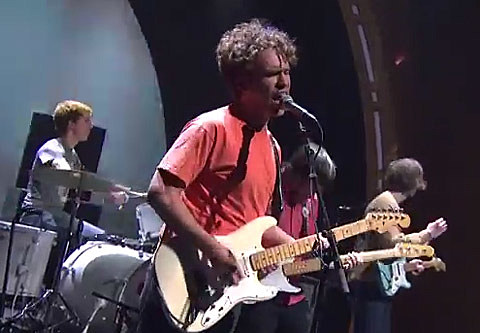 As we reported they would, Parquet Courts made their Late Night with Seth Meyers debut last night (4/30), performing new single "Black and White." You can watch that below, and listen to the studio version too. The song is is on their new album, Sunbathing Animal which is out June 3 on What's Your Rupture/Mom & Pop. If you pre-order the vinyl, you get a complimentary "Black and White" 7" that's on split black-and-white vinyl (looking much like the delicious cookie).

Parquet Courts' tour starts later this month and will hit NYC at Bed Stuy's Sugarhill Supper Club on June 11 with Protomartyr, Future Punx, and Xerox and is now sold out.

Parquet Courts doing "Black and White" on Late Night and the stream of the album version of the song are below...